How will the only male rhea at the Smithsonian's National Zoo spend Father's Day? He will spend it much like he has spent the past eight weeks: as a proud papa nurturing and caring for his four chicks born April 20. This is the first time in some 30 years that rhea chicks have hatched at the Zoo.

"The birth of these chicks comes at a time when the number of rheas in zoos is declining," said Zoo biologist Sara Hallager. "By developing a rhea studbook--an official record relating to the animal's history--we are hoping to ensure that knowledge relating to their husbandry is retained and to stimulate further interest in the birds both inside and outside of zoos."

Besides the bird's monumental size, the males' parenting behavior is rather unusual. The male bird hatches and raises the young. After mating, the male builds a nest and incubates the eggs. Once the eggs are hatched, he continues to rear the chicks, guarding them from any potential threat—including humans and even female rheas—for the first six months.

A large, flightless bird, the rhea is native to South America and is part of the family of birds known as ratites, which also includes the ostrich, emu, kiwi and cassowary. Rheas are often mistaken for ostriches because they share similar characteristics, including large feathers and a similar facial structure, and grow to an impressive size. The Zoo's male rhea stands 5 feet 8 inches and its two females are between 4 1/2 and 5 feet tall.

"The dad is doing a great job," Hallager said. "First-time parents sometimes don't know what to do. With this guy, it's pure instinct."

In the fall, the four birds—two males and two females—will find permanent homes at zoos in the U.S.

Until then, the National Zoo's entire rhea family—the male, two females and four chicks—may be viewed at the outside exhibit at the Birdhouse (between the flamingoes and cassowaries) from 8 a.m. to 4 p.m. daily. 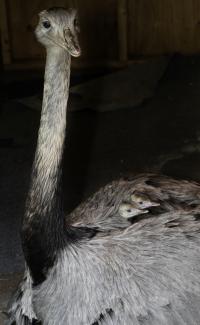