The gut microbiota is responsible for many aspects of human health and nutrition, but most studies have focused on "western" populations. An international collaboration of researchers, including researchers of the Max Planck Institute for Evolutionary Anthropology in Leipzig, Germany, has for the first time analysed the gut microbiota of a modern hunter-gatherer community, the Hadza of Tanzania. The results of this work show that Hadza harbour a unique microbial profile with features yet unseen in any other human group, supporting the notion that Hadza gut bacteria play an essential role in adaptation to a foraging subsistence pattern. The study further shows how the intestinal flora may have helped our ancestors adapt and survive during the Paleolithic.

Bacterial populations have co-evolved with humans over millions of years, and have the potential to help us adapt to new environments and foods. Studies of the Hadza offer an especially rare opportunity for scientists to learn how humans survive by hunting and gathering, in the same environment and using similar foods as our ancestors did.

The research team, composed of anthropologists, microbial ecologists, molecular biologists, and analytical chemists, and led in part by Stephanie Schnorr and Amanda Henry of the Max Planck Institute for Evolutionary Anthropology, compared the Hadza gut microbiota to that of urban living Italians, representative of a "westernized" population. Their results, published recently in Nature Communications, show that the Hadza have a more diverse gut microbe ecosystem, i.e. more bacterial species compared to the Italians. "This is extremely relevant for human health", says Stephanie Schnorr. "Several diseases emerging in industrialized countries, like IBS, colorectal cancer, obesity, type II diabetes, Crohn's disease and others, are significantly associated with a reduction in gut microbial diversity."

The Hadza gut microbiota is well suited for processing indigestible fibres from a plant-rich diet and likely helps the Hadza get more energy from the fibrous foods that they consume. Surprisingly, Hadza men and women differed significantly in the type and amount of their gut microbiota, something never before seen in any other human population. Hadza men hunt game and collect honey, while Hadza women collect tubers and other plant foods. Though they share these foods, each sex eats slightly more of the foods they target. "The differences in gut microbiota between the sexes reflects this sexual division of labour", says Stephanie Schnorr. "It appears that women have more bacteria to help process fibrous plant foods, which has direct implications for their fertility and reproductive success." These findings support the key role of the gut microbiota as adaptive partners during the course of human evolution by aligning with differing diets.

Finally, the Hadza gut microbe community is a unique configuration with high levels of bacteria, like Treponema, that in western populations are often considered signs of disease, and low levels of other bacteria, like Bifidobacterium, that in western populations are considered "healthy". However, the Hadza experience little to no autoimmune diseases that would result from gut bacteria imbalances. Therefore, we must redefine our notions of "healthy" and "unhealthy" bacteria, since these distinctions are clearly dependent on the environment we live in. Genetic diversity of bacteria is likely the most important criterion for the health and stability of the gut microbiome.

"Co-resident microbes are our 'old friends' that help us adapt to different lifestyles and environments", says Amanda Henry, leader of the Max Planck Research Group on Plant Foods in Hominin Dietary Ecology. "Through this analysis of the Hadza gut microbiota, we have increased our knowledge of human-microbiome adaptations to life in a savanna environment and improved our understanding of how gut microbiota may have helped our ancestors adapt and survive during the Paleolithic."

Gut microbiome of the Hadza hunter-gatherers 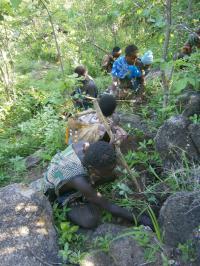