Without better local management, the world's most iconic ecosystems are at risk of collapse under climate change, say researchers in Science. Protecting places of global environmental importance such as the Great Barrier Reef and the Amazon rainforest from climate change will require reducing the other pressures they face, for example overfishing, fertilizer pollution or land clearing.

The international team of researchers warns that localized issues, such as declining water quality from nutrient pollution or deforestation, can exacerbate the effects of climatic extremes, such as heat waves and droughts. This reduces the ability of ecosystems to cope with the impacts of climate change.

"We show that managing local pressures can expand the 'safe operating space' for these ecosystems. Poor local management makes an ecosystem less tolerant to climate change and erodes its capacity to keep functioning effectively," says the study's lead author Marten Scheffer, chair of the Department of Aquatic Ecology and Water Quality Management at the Netherlands' Wageningen University.

The authors examined three UNESCO World Heritage Sites: Spain's Doñana wetlands, the Amazon rainforest and the Great Barrier Reef. While many ecosystems are important to their local people, these ecosystems have a global importance--hence their designation as World Heritage Sites. For instance, the Amazon rainforest is a globally important climate regulator.

Like coral reefs, rainforests and wetlands around the world, these sites are all under increasing pressure from both climate change and local threats.

For example, the Doñana wetlands in southern Spain are Europe's most important wintering site for waterfowl, hosting over half a million birds, and home to numerous unique invertebrate and plant species. Nutrient runoff from the use of agricultural fertilizers and urban wastewater is degrading water quality in the wetlands, causing toxic algal blooms, which endanger the ecosystem's biodiversity. A warming climate could encourage more severe blooms, causing losses of native plants and animals, say the researchers.

"Local managers could lessen this risk and therefore boost the wetlands' climate resilience by reducing nutrient runoff," says co-author Andy Green, a professor at the Doñana Biological Station. He added that nutrient control measures could include reducing fertilizer use, improving water treatment plants and closing illegal wells that are decreasing inputs of clean water to the wetlands.

Rising temperatures and severe dry spells threaten the Amazon rainforest and, in combination with deforestation, could turn the ecosystem into a drier, fire-prone and species-poor woodland. Curtailing deforestation and canopy damage from logging and quickening forest regeneration could protect the forest from fire, maintain regional rainfall and thus prevent a drastic ecosystem transformation.

"A combination of bold policy interventions and voluntary agreements has slowed deforestation in the Brazilian Amazon to one fourth of its historical rate. The stage is now set to build on this success by ramping up efforts to tame logging and inhibit fire," says Daniel Nepstad, executive director of Earth Innovation Institute.

The Great Barrier Reef is threatened by ocean acidification and coral bleaching, both induced by carbon dioxide emissions. Local threats such as overfishing, nutrient runoff and unprecedented amounts of dredging will reduce the reef's resilience to acidification and bleaching.

"As a wealthy country, Australia has the capability and responsibility to improve its management of the reef," adds Hughes.

"All three examples play a critical role in maintaining global biodiversity. If these systems collapse, it could mean the irreversible extinction of species," says Scheffer.

The authors suggest their evidence places responsibility on governments and society to manage local threats to iconic ecosystems, and such efforts will complement the growing momentum to control global greenhouse gases.

Yet, in the three cases they examined, they found local governance trends are worrisome.

"UNESCO is concerned that Australia isn't doing enough to protect the Great Barrier Reef. It would be disastrous for the $6 billion reef tourism industry and Australia's reputation if they list the GBR as 'in danger.' We need to put science into action to prevent this from happening," urges Hughes.

According to co-author Scott Barrett, the problem is one of incentives.

"These ecosystems are of value to the whole world, not only to the countries that have jurisdiction over them. It may be necessary for other countries to bring pressure to bear on these 'host' countries or to offer them assistance, to ensure that these iconic ecosystems are protected for the benefit of all of humanity," says Barrett, who is also a professor at Columbia University's School of International and Public Affairs.

Above all, the paper raises awareness of the great opportunities for enhanced local action.

"Local management options are well understood and not too expensive. So there is really no excuse for countries to let this slip away, especially when it comes to ecosystems that are of vital importance for maintaining global biodiversity," says Scheffer.

Creating a Safe Operating Space for the World's Iconic Ecosystems 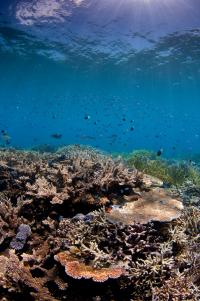