A new drug candidate may be the first capable of halting the devastating mental decline of Alzheimer's disease, based on the findings of a study published today in PLoS one.

When given to mice with Alzheimer's, the drug, known as J147, improved memory and prevented brain damage caused by the disease. The new compound, developed by scientists at the Salk Institute for Biological Studies, could be tested for treatment of the disease in humans in the near future.

"J147 enhances memory in both normal and Alzheimer's mice and also protects the brain from the loss of synaptic connections," says David Schubert, the head of Salk's Cellular Neurobiology Laboratory, whose team developed the new drug. "No drugs on the market for Alzheimer's have both of these properties."

Although it is yet unknown whether the compound will prove safe and effective in humans, the Salk researchers' say their results suggest the drug may hold potential for treatment of people with Alzheimer's.

As many as 5.4 million Americans suffer from Alzheimer's, according to the National Institutes of Health. More than 16 million will have the disease by 2050, according to Alzheimer's Association estimates, resulting in medical costs of over $1 trillion per year.

The disease causes a steady, irreversible decline in brain function, erasing a person's memory and ability to think clearly until they are unable to perform simple tasks such as eating and talking, and it is ultimately fatal. Alzheimer's is linked to aging and typically appears after age 60, although a small percentage of families carry a genetic risk for earlier onset. Among the top ten causes of death, Alzheimer's is the only one without a way to prevent, cure or slow disease progression.

Scientists are unclear what causes Alzheimer's, which appears to emerge from a complex mix of genetics, environment and lifestyle factors. So far, the drugs developed to treat the disease, such as Aricept, Razadyne and Exelon, only produce fleeting memory improvements and do nothing to slow the overall course of the disease.

To find a new type of drug, Schubert and his colleagues bucked the trend within the pharmaceutical industry of focusing exclusively on the biological pathways involved in the formation of amyloid plaques, the dense deposits of protein that characterize the disease. To date, Schubert says, all amyloid-based drugs have failed in clinical trials.

Instead, the Salk team developed methods for using living neurons grown in laboratory dishes to test whether or not new synthetic compounds were effective at protecting the brain cells against several pathologies associated with brain aging. Based on the test results from each chemical iteration of the lead compound, which was originally developed for treatment of stroke and traumatic brain injury, they were able to alter its chemical structure to make a much more potent Alzheimer's drug.

"Alzheimer's is a complex disease, but most drug development in the pharmaceutical world has focused on a single aspect of the disease--the amyloid pathway," says Marguerite Prior, a research associate in Schubert's lab, who led the project along with Qi Chen, a former Salk postdoctoral researcher. "In contrast, by testing these compounds in living cell cultures, we can determine what they do against a range of age-related problems and select the best candidate that addresses multiple aspects of the disease, not just one."

With a promising compound in hand, the researchers shifted to testing J147 as an oral medication in mice. Working with Amanda Roberts, a professor of molecular neurosciences at The Scripps Research Institute, they conducted a range of behavioral tests that showed that the drug improved memory in normal rodents.

The Salk researchers went on to show that it prevented cognitive decline in animals with Alzheimer's and that mice and rats treated with the drug produced more of a protein called brain-derived neurotrophic factor (BDNF), a molecule that protects neurons from toxic insults, helps new neurons grow and connect with other brain cells, and is involved in memory formation.

Because of the broad ability of J147 to protect nerve cells, the researchers believe that it may also be effective for treating other neurological disorders, such as Parkinson's disease, Huntington's disease and amyotrophic lateral sclerosis (ALS), as well as stroke.

The research was funded by the Fritz B. Burns Foundation, the National Institutes of Health, the Bundy Foundation and the Alzheimer's Association.

Alzheimer's drug candidate may be first to prevent disease progression 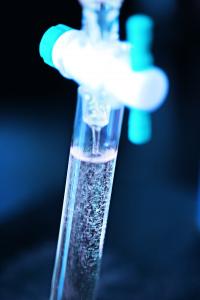 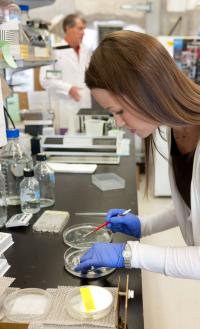