With little cases of ethanol to preserve tissue samples for total genomic DNA analysis, a trio covered much ground in the mountains of Japan and Korea to elucidate the evolution of the scorpionfly. The rugged scientists set out to use molecular phylogenetic analysis to show that the "alpine" type of scorpionfly and "general" type must be different species. After all, the alpine type exhibit shorter wings than the general type, and alpine type females also have very dark and distinct markings on their wings.

However, what they found in the DNA surprised them.

Casually called the scorpionfly because the males have abdomens that curve upward and are shaped like the stinger of scorpions, the Panorpodes paradoxus do not sting. Tomoya Suzuki, postdoc research fellow of the Faculty of Science at Shinshu University, Suzuki's father, expert of scorpionflies, Nobuo Suzuki, professor at the Japan Women's College of Physical Education and Koji Tojo, professor at the only Institute for Mountain Science in Japan, Shinshu University, were able to indicate parallel evolutions of Japanese scorpionflies through Bayesian simulations and phylogenetic analyses.

Insects are among the most diverse organism on earth and many fall captive to their elegant beauty as did the scientists dedicated to their study. Insects are very adaptive to their habitat environments, making them excellent subjects to study ecology, evolution and morphology. Phylogenetics is the study of evolutionary history, often visualized in the form of ancestral trees. The team studied the Japanese scorpionfly by collecting samples of the Panorpodes paradoxus throughout Japan and parts of the Korean peninsula searching for samples in altitude of up to 3033 meters.

In a previous study, Professor Tojo was able to correlate plate tectonic geological events in Japan by studying the DNA of insects from a relatively small area of Nagano prefecture. By testing DNA, they discovered the different lineages align with how the land formations occurred in Japan, with some insect types having a more similar background to those on the Asian continent.

The Japanese archipelago used to be a part of mainland East Asia. About 20 million years ago, the movement of the tectonic plates caused the Japanese land mass to tear away from the continent. By around 15 million years ago, the Japanese islands were completely detached and isolated from the mainland. Ancestral lineages of the Japanese Panorpodes therefore, diverged from the continental types around this time. The two major phenotypes of scorpionflies in Japan; the "alpine" type that live in higher altitudes and have shorter wings, and their "general" type counterparts. It is hypothesized that the shorter wings are better suited for the colder climate of higher elevations. The alpine and general types also have slightly different seasonal periods when they can be observed in the wild.

Through Bayesian simulations which are estimates through probability, the divergence time of the genealogical lineages were estimated. Simulations were run for over 100 million generations. The divergence time of the continental and Japanese Panorpodes was estimated to be 8.44 million years ago. The formation of the mountains in the Japanese Archipelago which began around 5 million years ago could be seen in the estimated evolution of the alpine type of P. paradoxus. Another estimated evolution time coincided with climate change cooling times. Cool weather is a tough environment for insects and serves as a genetic selection process. The cool glacial periods encouraged local adaptation of the scorpionflies in the northeast part of the island of Honshu.

With DNA tests of the various scorpionfly specimens, the group was able to show how the P. paradoxus "ecomorphed" or evolved to have forms and structural features adapted to their ecology. This parallel evolution started about 5 million years ago, when the mountain ranges in central Japan formed. Gene flow between the samples collected at different mountains were not detected, evidence of the parallel evolution. Interestingly however, gene flow between the general and alpine types might be happening, one indicator that they are not different species.

In conclusion, the alpine type and general type were not separate species as they suspected, but the alpine scorpionfly ecomorphed, explaining why they looked different. Through a next generation sequencer the team hope to elucidate the exact moment of difference. What sort of genetic basis underlies the alpine ecomorph? What type of genes emerged to facilitate the shortening of the wings? The team hope to study the genetic basis for the ecomorph. To do so, Dr. Suzuki wishes to breed scorpionflies to further elucidate the differences in the gene expression from the alpine and general types. Breeding is necessary to perform the next generation sequencer but what the larva feeds on and other growing conditions remain a mystery. The trio hope to unlock each of these steps to further identify the unknown aspects of the Japanese scorpionfly, as well as continue cutting edge research at the Institute for Mountain Science in Japan, Shinshu University, which is blessed to be surrounded by the Alps in the heart of Japan.

The parallel ecomorph evolution of scorpionflies: The evidence is in the DNA 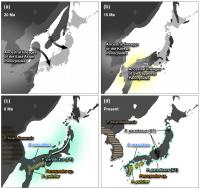 A Scheme of Evolutionary History of the East Asian Panorpodes Scorpionflies 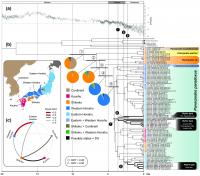