Researchers from the University of Chicago have shown that inhibiting autophagy, a self-devouring process used by cells to degrade large intra-cellular cargo, effectively blocks tumor cell migration and breast cancer metastasis in tumor models. In a study, published May 12, 2016, in the journal Cell Reports, they demonstrate that the process is essential for tumor metastasis and describe the mechanisms that connect autophagy to cell migration.

"Using genetic and chemical means, we showed that autophagy is required for the motility and invasion of highly metastatic tumor cells," said team leader Kay MacLeod, PhD, associate professor in the Ben May Department for Cancer Research at the University of Chicago. "Our work suggests that inhibiting autophagy in the clinical setting may be an effective approach to block metastatic dissemination."

Metastasis is responsible for 90 percent of cancer deaths. Rapidly growing tumor cells are tightly packed. They quickly exhaust their available supplies of oxygen and nutrients. By breaking away from the original tumor, migrating cancer cells have a chance to escape starvation and wind up in a less crowded environment with more nutrients.

"We began by asking, what would happen if we shut down autophagy in metastatic cancer cells," Macleod said. Two MD/PhD students working in MacLeod's laboratory, Marina Sharifi and Erin Mowers, noticed that when they placed metastatic breast cancer cells on a dish and monitored them with time-lapse microscopy, the control cells were "active, constantly moving around the dish," MacLeod said. But cancer cells that the team had altered, by knocking down autophagy-related genes Atg5 and Atg7, "didn't move at all. They appeared to be stuck."

When they injected these gene-altered cancer cells into the mammary fat pad of female mice, the cells multiplied, forming large primary breast tumors, but these cancer cells were unable to metastasize to the usual distant sites, the lungs, liver or bone. A closer look showed that these cells were morphologically very different. Their focal adhesions, large structures at the edge of the cell that are crucial for cell movement, were more numerous and abnormally large.

"Focal adhesions function like tank tracks," MacLeod explained. These large protein complexes are assembled at the front of the cell. They extend through the periphery of the cell and connect to the extra-cellular matrix. The cell uses them for traction to push or pull itself over the matrix.

As the cell travels forward, focal adhesions form at the front of the cell and establish dynamic connections to the extracellular matrix. As the cell passes over them, these adhesions drift back to the trailing edge of the cell. Then autophagy intervenes, disassembling the focal adhesion, breaking down its contents and allowing the back edge of the cell to disengage from the extracellular matrix and be pulled forward by traction from the front end.

Macleod and colleagues show that if autophagy is inhibited, these metastatic tumor cells cannot move. Adhesions that don't get turned over grow larger and larger. They anchor the cell in place.

"They literally just get stuck," MacLeod said. "Through the microscope, you can see the cell wobbling, trying to move, to put out new protrusions, to migrate. But it can't, because it is stuck, unable to dissolve the adhesions at the back end of the cell. Basically, autophagy-deficient tumor cells cannot migrate and as a result cannot travel to another location. This is why we think that inhibiting autophagy could block tumor metastasis."

A closer look at the process revealed the biochemical connection between autophagy and focal adhesions. A protein called paxillin, found in focal adhesions, is used to link the internal components of cellular protrusions to cell migration. When the cell needs to disassemble a focal adhesion, the autophagy process uses LC3, a key protein in the autophagy system, to engulf paxillin and transport it to a lysosome, where it is degraded.

"The interaction between LC3 and paxillin is regulated by SRC," MacLeod said. SRC, which promotes cell migration and metastasis, was the first defined oncogene. Study co-author Erin Mowers showed that SRC's ability to promote metastasis depends on autophagy.

"If you inhibit autophagy, SRC can no longer drive migration of metastatic tumor cells," MacLeod said. "This is a major finding."

"But it is not being specifically evaluated as a way to prevent metastasis," MacLeod notes. "We would like to see trials designed to evaluate the efficacy of hydroxychloroquine or related drugs at blocking the progression to metastasis. We think that's where this approach of inhibiting autophagy will be most useful as an anticancer measure."

"This study adds to a growing body of work linking autophagy to tumor cell mobility, invasion and metastasis," the authors conclude. "Together with our work identifying a critical role for autophagy in focal adhesion disassembly through paxillin degradation and its requirement for escape from the primary tumor, these studies highlight the potential utility of inhibiting autophagy to block tumor metastasis."

Although most of these experiments in the Cell Reports paper were done with breast cancer cells transferred to mice, the researchers saw the same phenomenon in metastatic melanoma cells. "So this reliance on autophagy to metastasize appears not to be specific to any one tumor type," MacLeod said.

Additional authors of the study were Lauren Drake, Chris Collier, Hong Chen, Marta Zamora and Stephanie Mui, all from the University of Chicago. Work on this project was supported by an RO1 grant (CA162405) from the National Cancer Institute (NIH) to Macleod.

Stopping cancer in its tracks 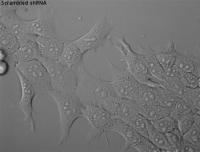