The research group for Regional Carbon Emission and Reduction Quotas from Scientific Information Center for Resources and Environment/Lanzhou Branch of the National Science Library, Chinese Academy of Sciences undertaked the family interview surveys from the summer of 2011 to the spring of 2012, selecting 1523 urban and rural families in 24 cities and counties of Gansu, Xinjiang, Ningxia, Inner Mongolia, Shanxi, Shaanxi, Qinghai in Northwestern China, in order to reveal the pattern of household carbon emissions in Northwestern China. The research paper Household Carbon Emission Differences and their Driving Factors in Northwestern China has been published on Chinese Science Bulletin, 2013, No.3.

The fact, that the household carbon emission in Northwestern China is at a relatively low level, has important reference value for the international discussion on the carbon reduction responsibility which has great influence on the poverty population's rights, and will be helpful for the development of the regional energy-saving emission reduction targets.

This study was supported by the "Strategic Priority Research Program — Climate Change: Carbon Budget and Related Issues" of the Chinese Academy of Sciences，Grant No. XDA05140100.

The household carbon emission per capita in Northwestern China is only 2.05 tons CO2 per year 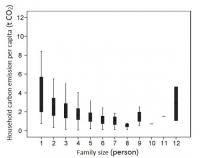 Relationships between the Family Size and Household Carbon Emission