Football on TV: A pass to the left, a gap in the defence, an open striker at the edge of the penalty area. Suddenly, the picture freezes. Lines and diagrams appear between the players. An arrow indicates the trajectory of a safe pass to the open striker, others highlight possible goal-scoring trajectories. Such graphic analyses have become indispensable for professional football broadcasters. They help viewers understand the dynamics and tactics of the match as well as the decisions made by the players. Behind the scenes, however, all of this amounts to a lot of work. The television crew must generate these graphics live and under enormous pressure as the match unfolds. Once they are ready, the match has long since moved on so that the graphics are typically shown during action replays. How wonderful would it be if all of this just happened by itself, i.e. if the TV set was able to display these graphics in real time and without intervention from the television team? Computer scientists from the University of Konstanz have found a way to make this possible: They are developing software that automatises all steps involved in the process. It analyses the match up to 30 times per second and is able to display decisive diagrams live and without the customary delay. Among other things, this software can highlight areas of team dominance on the pitch as well as passing options in real time. It is further able to indicate the level of pressure experienced by individual players and can even run what-if scenarios of alternative match play variations.

Manuel Stein, a computer scientist and doctoral researcher working in the University of Konstanz's research area "Collective Behaviour", is the man behind this software. He not only designed this software to make the football analysts' job easier, but he also intends to make it easier for viewers to see the patterns of the game - the interactions between players and entire teams as well as the influence they exert on one another. "Everyone in football tries to collect data, but few know what to do with it. We are trying to generate knowledge from this data", explains Manuel Stein.

To turn a computer into a match-play analyst, Manuel Stein must first teach it some basic facts about football. Not necessarily the rules, the names of the teams or where they rank in the league or rankings table, but something much more important: What is the player on the screen, and where is the ball? In which direction are individual players looking, how fast are they moving, how quickly are they likely to reach the ball? The computer is able to determine the position, speed and movement direction of every individual player and of the ball up to 30 times per second. Based on these measurements, it then calculates which player can reach any square metre of the pitch first and how many players from each team pose a threat to that part of the field. It doesn't take more than a fraction of a second to superimpose the results of this calculation on the TV screen: a dynamic, constantly changing map of each team's zones of influence. Using simple colour cues, Manuel Stein's software is able to show TV viewers such match-play influencing factors such as the level of pressure opposing teams place on individual players, the free spaces and safe passing lanes. For all of this, the software neither requires GPS trackers attached to the players' shirts nor complicated camera tracking technology. The only thing that Manuel Stein needs is the TV image.

All of these hues on the TV screen can make for a very colourful football pitch. To prevent confusion, the software's various analysis features can be switched on and off as needed and stacked as filters. Furthermore, the software makes suggestions as to which filters to use in any given situation and can switch them on or off as desired to reduce unnecessary visual clutter.

However, it is not primarily the viewers at home that the software has been developed for. Its real target group are football analysts and sport reporters. The software allows them to create diagrams of match-play situations within a fraction of a second and to broadcast them in real time.

Manuel Stein is currently developing a "what-if" analysis - a forecast of how the match play would have evolved under different circumstances - that is based on his software. Here, key match-play situations can be accessed and replayed using alternative scenarios. Based on the individual players' location data and influence factors, the computer calculates a coherent, realistic course of events. What would have happened if the player had passed the ball to the right rather than the left? How would the dynamics of the game have changed if a defender had stood five more metres to the right? How should the team have positioned itself to prevent the opposing team from gaining ground? These analysis tools are also valuable to football coaches, for instance during post-match debriefing.

Collaboration with football teams and broadcasters

The more data Manuel Stein's software has access to, the more precise it can evaluate the situation on the pitch. However, currently the information it can use is limited to that on the TV screen. The computer does not know what happens outside the camera's field of vision and can only make vague predictions. The University of Konstanz's computer scientists are therefore extremely eager to work with teams and broadcasters who record images and player location data during football games. If they provide the researchers with access to this information, they can in turn deliver more precise analyses. But football is not the only sport this software is relevant to. It can be used to analyse all team sports.

Manuel Stein's is carrying out his research as a member of the University of Konstanz's research initiative "Collective Behaviour". This relatively young discipline explores the mutual influences and interactions between members of a collective. The researchers are particularly interested in the decision-making processes within groups and the question as to how individual members of a collective coordinate their movements, decisions, etc. with one another. Examples include the behaviour of animal swarms and swarm intelligence, the coordination of self-driving cars, but also economic networks or the behaviour of human collectives. In sport, these scientific methods are used especially in the analysis of team dynamics: What types of patterns do a team's tactics reflect? How do two teams react to each other and how do the players influence each other with their decisions?

Explanation: This is how a computer perceives a football match: Tracking the players and the ball provides the basis for the automated analysis graphics that are then superimposed onto the actual TV image.
Copyright: University of Konstanz

1) https://cms.uni-konstanz.de/fileadmin/pi/fileserver/2018/Bilder/Fussball_durch_die_Augen_des_Computers.jpg
Caption: Screen shot of an automated game analysis. The coloured areas indicate open spaces that are relevant to the goal situation. The software reacts to the events in real time and updates the superimposed information up to 30 times per second. Additional graphics can be shown as needed, for instance to highlight areas of team dominance and passing options.
Copyright: Dietmar Wallner

Football through the eyes of a computer 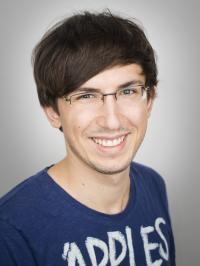