The Galapagos giant tortoise, one of the most fascinating species of the Galapagos archipelago, treks slowly and untiringly across the volcanic slopes. Scientists of the Max Planck Institute for Ornithology in Radolfzell, together with the Charles Darwin Foundation, have used GPS technology and modern 3D acceleration measurements to find out that especially the dominant male tortoise wanders up to 10 kilometres into the highlands of the island. Only the fully grown animals migrate, the young tortoises stay year round in the lowlands. The reason for this and the question of why the animals don't rest during the dry season are not known yet.

Even Charles Darwin anticipated that the giant tortoises wandered large distances. In the cool dry season, the highlands of Santa Cruz are engulfed in fog which allows the vegetation to grow despite the lack of rain. In the lowlands, however, there is no thick layer of clouds and the tortoises' vegetation is not available year round. Adults, which can weigh up to 250 kilogram, spend the dry season in the higher regions at an elevation of 400 meters above sea level. However, since the food is not as nutritious there, they trek back to the lower zones where there is succulent vegetation in abundance as soon as the rainy season begins.

In order to study the migratory pattern more closely, Stephen Blake from the Max Planck Institute for Ornithology and his colleague Washington Tapia from the Galapagos National Park secured GPS loggers with 3D acceleration monitors onto 17 adult tortoises. This allowed the scientists to determine the animals' exact position and behaviour over a period of two years. In order to gather information on the entire population, the researchers noted the size, sex and location of each tortoise they met on their monthly hikes along the volcanic hillsides. They combined the GPS data with the temperature data and information about availability of vegetation.

The results show that the tortoises have a partial migration system, where not every individual migrates. Only the adult animals wander and only the larger specimens are more likely to move. In June they start their slow, tedious march which can be up to ten kilometres long into the highlands. Adult females remain in the lowlands until they lay their eggs and then they also make their way to the highlands. In contrast, the smaller tortoises stay in the lower elevated areas all year round.

Although giant tortoises are able to survive for up to one year without nourishment, which made them a popular staple for seamen, they nevertheless wander for large distances searching for food as this study shows for the first time. Why don't they just look for a shelter? The question of why the younger animals don't migrate hasn't been answered by the scientists yet. "Either the energy expenditure of this strenuous hike is too high, or there is still enough food available for the smaller animals." Stephen Blake suspects, "perhaps the younger animals can't tolerate the wet cold climate of the higher regions."

Future studies on giant tortoise species of the other Galapagos Islands with varying ecological conditions will show how environment influences the migration scheme of these closely related reptiles. The scientists also want to include factors such as age, size, sex and morphology in their studies to see why the behaviour changes in different lifetime stages and what the trigger of migration is.

Despite the threat of hunting, invasive species such as goats and rats, and the loss of habitat due to man, the Galapagos Tortoise still shows its original migrating behaviour. This and future studies will help to maintain this behaviour with the help of effective measures such as establishing corridors, preserving key habitats, keeping tortoise-friendly roads and maintaining less urban development. Based on its importance to the Galapagos Archipelago ecosystem as an herbivore and seed disperser, the annual migration of the tortoise must be preserved.

Galapagos tortoises are a migrating species 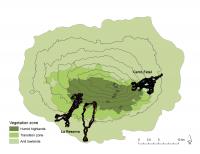