A new study led by researchers from the Institute of Environmental Science and Technology of the Universitat Autònoma de Barcelona (ICTA-UAB) warns that the negative effects of rapid ocean warming on planktonic communities will be exacerbated by ocean acidification.

The research, recently published in the journal Scientific Reports of Nature, shows that some of the major environmental changes projected for this century in the Mediterranean Sea (e.g., ocean acidification, ocean warming, and the increasingly frequent marine heatwaves in summer) can have adverse effects on the productivity of calcifying phytoplankton communities (coccolithophores).

Carbon dioxide (CO2) emissions by human activities have alarmingly increased in the past decades. A quarter of this anthropogenic CO2 has been absorbed by the ocean, changing the chemistry and ultimately lowering the pH of the seawater, a phenomenon known as ocean acidification.

The extra heat trapped in the atmosphere due to greenhouse gases is also causing the warming of the seawater (which annually absorbs up to 90% of this heat). The process hampers the supply of nutrients to the upper ocean layers, due to a sharp stratification of the surface water column.

"Atmospheric warming is expected to evolve in the Mediterranean area 20% faster than the global average, and marine heatwaves will occur with increasing frequency by the end of the 21st century, with serious consequences for marine biodiversity and production", says Dr Patrizia Ziveri, ICREA Research Professor at the ICTA-UAB.

Coccolithophores, a very abundant group of marine calcifying phytoplankton, play a major role in the biogeochemical cycles and in the regulation of the global climate. These tiny algae, which measure < of a millimetre, are at the basis of the aquatic trophic chain, and interact with atmospheric and oceanic CO2 through calcification and photosynthesis.

So far, few studies have analysed how warming and acidification combined may affect the physiological performance and evolutionary success of the coccolithophore communities. Most studies have been carried out in the laboratory on clones of individual species. ICTA-UAB researchers, in collaboration with the Hellenic Centre for Marine Science Research (HCMR), conducted the experiment in mesocosms using plankton communities collected from naturally nutrient-limited waters of the Eastern Mediterranean Sea (offshore Crete Island, Greece), which included cells of calcifying phytoplankton.

The study, led by Patrizia Ziveri, detailed the behaviour of these algae under conditions of water temperature ? 28°C and a pH of approximately 7.8 units. This is the first time a study like this is conducted in the Eastern Mediterranean, a nutrient-limited region.

"The results highlight a clearly negative effect of thermal stress on coccolithophore cell production and calcification. Likewise, anomalous calcification in this group of phytoplankton was associated with ocean acidification. In addition, for the first time we have registered an interesting increase in the productivity of Rhabdosphaera clavigera, a typical species of the Eastern Mediterranean, in response to acidification", first author of the paper Barbara D'Amario comments. This highlights the importance of looking at species-specific responses to climate change and addressing their specific adaptation mechanisms.

Scientists believe that, due to the progressive increase of CO2 emissions in the atmosphere, the risks derived from ocean warming and acidification will become even more acute in the coming decades, thus changing the plankton communities of the Mediterranean. In the future, a clear understanding of the interactions between the different components of the plankton communities will be essential to better understand the future impact of environmental changes on their adaptation and productivity. 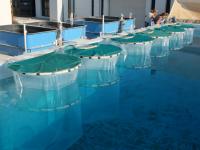