NASA's Aqua satellite passed over the Gulf of Mexico and collected temperature information on Tropical Storm Gordon's clouds as it moved toward landfall and after landfall. Those cloud top temperatures indicated that Gordon has the potential to generate heavy rainfall as it moves inland over the next several days.

The Atmospheric Infrared Sounder or AIRS instrument aboard NASA's Aqua satellite passed over Tropical Storm Gordon on Sept. 4 at 3:05 p.m. EDT (19:05 UTC) and analyzed the storm in infrared light. Infrared light provides temperature data and that's important when trying to understand how strong storms can be. The higher the cloud tops, the colder and the stronger they are.

Soon after the AIRS image, the National Hurricane Center or NHC noted "Gordon has been undergoing another convective bursting phase during the past few hours, with a sharp increase in Doppler velocity values noted between 9,000-12,000 feet (meaning cloud tops were reaching that altitude)."

At 11 a.m. EDT on Sept. 4, the NHC said that aircraft and radar imagery showed that the center of Gordon was making landfall just west of the Alabama-Mississippi border.

On Sept. 5 at 3:10 a.m. EDT (0710 UTC) Aqua passed over the Gulf coast again, and the Moderate Resolution Imaging Spectroradiometer or MODIS instrument aboard measured infrared temperatures. That data showed the cloud top temperatures were as cold as they were when AIRS passed over 12 hours before. However, they were not in as wide an area. The coldest cloud tops and heavy rainmaking storms were around the low-level center and in a large band east of the center.

At 8 a.m. EDT (1200 UTC) on Sept. 5, the National Hurricane Center (NHC) noted the center of Tropical Depression Gordon was located near latitude 32.0 degrees north and longitude 89.9 degrees west. The center of circulations is about 25 miles (40 km) south-southeast of Jackson, Mississippi.

Gordon is moving toward the northwest near 14 mph (22 kph). A northwestward motion with some decrease in forward speed is expected over the next couple of days. A turn toward the north-northwest and north is forecast to occur on Friday. Maximum sustained winds have decreased to near 35 mph (55 kph) with higher gusts in a few squalls near the center. Additional weakening is expected as Gordon moves farther inland.

The NHC's key messages are that heavy rainfall from Gordon will affect the western Florida Panhandle, southwest Alabama, southern and central Mississippi, northeastern Louisiana, Arkansas, Missouri, southern Iowa and Illinois, with isolated maximum amounts of 12 inches through early Saturday. This rainfall will cause flash flooding across portions of these areas.

On the forecast track, the center of Gordon will move across the lower Mississippi Valley today. 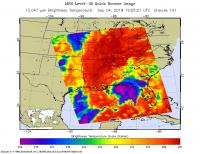