The Sun's activity is determined by the Sun's magnetic field. Two combined effects are responsible for the latter: The omega and the alpha effect. Exactly where and how the alpha effect originates is currently unknown. Researchers at the Helmholtz-Zentrum Dresden-Rossendorf (HZDR) are putting forward a new theory for this in the journal Solar Physics. Their calculations suggest that tidal forces from Venus, the Earth and Jupiter can directly influence the Sun's activity.

Many questions regarding the Sun's magnetic field are still unanswered. "As with the Earth, we are dealing with a dynamo. Through self-excitation, a magnetic field is created from virtually nothing, whereby the complex movement of the conductive plasma serves as an energy source," says the physicist Dr. Frank Stefani from HZDR. The Sun's so-called alpha-omega dynamo is subject to a regular cycle. Approximately every eleven years the polarity of the Sun's magnetic field is reversed, with solar activity peaking with the same frequency. This manifests itself in an increase in sunspots - dark patches on the Sun's surface which originate from strongly concentrated magnetic fields.

"Interestingly, every 11.07 years, the Sun and the planets Venus, the Earth and Jupiter are aligned. We asked ourselves: Is it a coincidence that the solar cycle corresponds with the cycle of the conjunction or the opposition of the three planets?" ponders Stefani. Although this question is by no means new, up to now scientists could not identify a plausible physical mechanism for how the very weak tidal effects of Venus, the Earth and Jupiter could influence the Sun's dynamo.

"If you only just give a swing small pushes, it will swing higher with time," as Frank Stefani explains the principle of resonance. He and his team discovered in recent calculations that the alpha effect is prone to oscillations under certain conditions. "The impulse for this alpha-oscillation requires almost no energy. The planetary tides could act as sufficient pace setters for this." The so-called Tayler instability plays a crucial role for the resonance of the Sun's dynamo. It always arises when a strong enough current flows through a conductive liquid or a plasma. Above a certain strength, the interaction of the current with its own magnetic field generates a flow - in the case of the colossal Sun, a turbulent one.

It is generally understood that the solar dynamo relies on the interaction of two induction mechanisms. Largely undisputed is the omega effect, which originates in the tachocline. This is the name of a narrow band between the Sun's inner radiative zone and the outer areas in which convection takes place, where heat is transported using the movement of the hot plasma. In the tachocline, various, differentially rotating areas converge. This differential rotation generates the so-called toroidal magnetic field in the form of two "life belts" situated north and south of the solar equator.

A new recipe for the solar Dynamo

Now the HZDR scientists have discovered the first evidence for the Tayler instability also oscillating back and forth between right- and left-handedness. What is special about this is that the reversal happens with virtually no change to the flow energy. This means that very small forces are enough to initiate an oscillation in the alpha effect. "Our calculations show that planetary tidal forces act here as minute external pace setters. The oscillation in the alpha effect, which is triggered approximately every eleven years, could cause the polarity reversal of the solar magnetic field and, ultimately, dictate the 22-year cycle of the solar dynamo," according to Stefani.

The scientists surrounding Frank Stefani have been researching magnetic fields in the cosmos and on Earth for many years. They were also the first group in the world to successfully prove both the Tayler instability and the magnetorotational instability in laboratory experiments. In 1999, the specialists in magnetohydrodynamics were also involved in the first demonstration of the homogeneous dynamo effect in Riga.

"Interestingly, we stumbled upon the Tayler instability in the context of our research into new liquid-metal batteries, which are currently being investigated as possible inexpensive storage containers for the strongly fluctuating solar energy," explains Frank Stefani. The fundamental principle of liquid-metal batteries is extremely simple. It consists of two liquid metals of differing densities - the electrodes - which are only separated by a thin layer of salt. The benefits are an extremely quick charging time, an (at least theoretically) infinite number of charging cycles and low costs, if a battery which is one square meter in size can successfully be produced. "For these batteries, the Tayler instability poses a serious danger because it inevitably arises when the cells get bigger and bigger. Without certain technological tricks, which we have already patented, the Tayler instability would destroy the battery's stratification," adds Stefani.

Are planets setting the sun's pace? 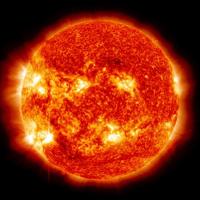