The first paper published on June 15th, the authors provide a set of arguments for classifying ageing as a disease. The paper by Bulterijs, Roy and colleagues propositions that disease classification is too often dependent on social and cultural context, and that separating 'normal' progression from 'healthy' aging lacks coherence and hinders efforts to ameliorate age-related suffering. For example, several currently recognized diseases, such as osteoporosis, isolated systolic hypertension, and senile Alzheimer's disease, were in the past ascribed to normal aging. Recognising aging as a unique, but multisystemic disease would provide a framework to tackle and prevent many chronic conditions; alleviating both financial, social and moral burden.

The second paper calls for a task force to be created to classify ageing as a disease with a granular and actionable set of disease codes in the context of the 11th International Statistical Classification of Diseases and Related Health Problems (ICD-11).

Classifying aging as a disease is a highly debated topic, where there is clear disagreement among demographers, gerontologists and biogerontologists on the subject, classification of aging as a disease is likely to unite both scientists and medical practitioners in the effort to prevent the pathological age-related processes and attract more resources to aging research.

In part, the report calls for creating a task force of scientists to more thoroughly evaluate whether to provide a more granular and actionable classification of aging as a disease in ICD-11. "A more granular classification of ageing as a disease with a set of "non-garbage" ICD disease codes will help put it in the spotlight and help attract resources to accelerate research. Also, like with any disease, acceptance of the disease is the first step to treatment", said Alex Zhavoronkov, PhD, Chief Science Officer of the Biogerontology Research Foundation.

Both papers were published as part of the Frontiers Research Topic "Should we Treat Aging as a Disease? Academic, pharmaceutical, healthcare policy and pension fund perspectives", which presents a collection of focused articles on the subject. http://journal.frontiersin.org/researchtopic/3133/should-we-treat-aging-as-a-disease-academic-pharmaceutical-healthcare-policy-and-pension-fund-perspe

Another popular science article, "Label ageing as a disease and unleash the hunt for a cure", summarizing the arguments for classifying ageing as a disease will be published in this week's New Scientist magazine and is available online at: https://www.newscientist.com/article/dn28531-label-ageing-as-a-disease-and-unleash-the-hunt-for-a-cure/

The Biogerontology Research Foundation seeks to fill a gap within the research community, whereby the current scientific understanding of the ageing process is not yet being sufficiently exploited to produce effective medical interventions. The BGRF will fund research which, building on the body of knowledge about how ageing happens, will develop biotechnological interventions to remediate the molecular and cellular deficits which accumulate with age and which underlie the ill-health of old age.

Addressing ageing damage at this most fundamental level will provide an important opportunity to produce the effective, lasting treatments for the diseases and disabilities of ageing, which are required to improve quality of life in the elderly. The BGRF seeks to use the entire scope of modern biotechnology to attack the changes that take place in the course of ageing, and to address not just the symptoms of age-related diseases but also the mechanisms of those diseases. 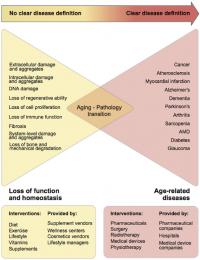