Changes in the composition of magma may have caused variations in the Panama Canal volcanic rock formations, according to a study published May 10, 2017 in the open-access journal PLOS ONE by David Farris from Florida State University, and colleagues.

The Earth's crust is divided into tectonic plates and a chain of volcanoes can often appear in areas where one plates is pushed under another. Studying these locations can improve our understanding of how the Earth's crust is formed.

The authors of the present study examined volcanic formations along the Panama Canal, which formed when the Panama block and South America collided approximately 21 to 25 million years ago. The researchers constructed geochemical models of these rock formations, and they identified some significant differences in their physical structure and chemical composition.

The authors suggest that along the Panama Canal, changing tectonic conditions were brought about by the collision of the Panama block and South America. They state that changes in the composition of volcanic rocks likely drove a transition from water-bearing magmas to dry, hot magmas over time, and these magmas in turn caused different types of volcanoes to form. Additional research could further explore the relationship between magma composition, physical properties and volcanic forms in other areas of the world.

Dr Farris notes: "This study examines the relationship between arc magmatism and tectonic change in a sequence of volcanic rocks along the Panama Canal. These rocks contain a change from wet to dry arc magmatism associated with the onset of collision between the Panama block and South America. In addition, the onset of hot, dry magmatism led to formation of explosive maar volcanic structures."

In your coverage please use this URL to provide access to the freely available article in PLOS ONE: http://journals.plos.org/plosone/article?id=10.1371/journal.pone.0176010 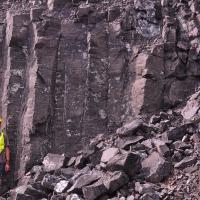