The Tropical Rainfall Measuring Mission satellite known as TRMM has been monitoring the rainfall rates in Hurricane Celia, and noticed rain is falling moderately as the storm continues to strengthen.

At 5 a.m. EDT on June 22, Hurricane Celia had maximum sustained winds near 105 miles per hour. That makes Celia a category two storm on the Saffir-Simpson scale. National Hurricane Center forecasters noted that Celia could become a major hurricane (Category Three) in the next two days.

Celia's center was located near 11.8 North latitude and 104.7 West longitude. That's about 500 miles south of Manzanillo, Mexico. Celia is moving toward the west near 8 mph (13 km/hr) and this general motion is expected to continue for the next 48 hours. Celia's estimated minimum central pressure is 970 millibars.

The TRMM satellite revealed moderate rainfall around the center of Hurricane Celia on June 21 at 1753 UTC (1:53 p.m. EDT). On June 20, as Celia was strengthening as a tropical storm, TRMM captured data that showed powerful thunderstorms in the southwest quadrant of the storm. The tops of those thunderstorms pushed to heights of almost 9.32 miles (15 kilometers). TRMM is managed by both NASA and the Japanese Space Agency, JAXA.

Infrared imagery from the Geostationary Operational Environmental Satellite, GOES-11, did not see an eye this morning (June 22) although images from a polar orbiting satellite did see a small eye just after 0000 UTC (8 p.m. EDT) on June 21.

The east-southeasterly wind shear that is currently affecting Celia is forecast to relax. That will give Celia the ability to strengthen in the next 24 hours, thus, the possibility that Celia could reach Category Three strength. 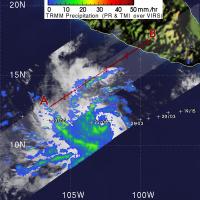