Researchers who took a closer look at a 1995 tsunami in the Gulf of Elat-Aqaba, at the northeastern tip of the Red Sea, say that the gulf's surrounding countries should prepare for future tsunami hazards in the economically developing vital region.

A team of scientists led by Amos Salamon of the Geological Survey of Israel simulated tsunamis, using the GeoClaw modeling program, paired with models of the magnitude 7.2 Nuweiba earthquake, which led to the 1995 tsunami in the gulf. They conclude in the journal Seismological Research Letters that the tsunami simulations correspond well with data on wave height, inundation and damage reported from the actual small tsunami.

Four countries--Egypt, Saudi Arabia, Jordan and Israel--border the Gulf of Eliat-Aqaba. Nuweiba is an Egyptian coastal town on the gulf. The tsunami reached its greatest wave height--three to four meters at the Nuweiba harbor --and brought the most serious damage to a platform there, with some minor damage also occurring to local nomad dwellings along the coast and to the Aqaba Port.

The tsunami was a surprise at the time, happening in a closed gulf far away from the open ocean, but has been mostly forgotten, said Salamon. "People remember the earthquake and the shaking rather than the tsunami. It went 'below the radar,' and was left hidden in reports and papers."

The 1995 earthquake took place along the Dead Sea Transform, the fault system that runs from southeastern Turkey to the southern tip of the Sinai Peninsula. "We have already learned that earthquakes along the fault system have the potential to generate tsunamis in the Eastern Mediterranean through seismogenic submarine landslides, but now we realize that it is also capable of generating tsunamis in the gulf by co-seismic deformation as well as by submarine landslides," Salamon said.

The motion along the fault that ruptured in the 1995 Nuweiba earthquake was predominantly strike-slip, where rocks slide past each other in a horizontal fashion along a vertical fracture. The most damaging tsunamis around the globe have been associated with thrust faults, where one slab of crust rides over the top of another slab. But researchers have noted several tsunamis related to strike-slip faults in recent years, including the magnitude 7.5 Palu earthquake in Indonesia last year, even though these ruptures do not tend to produce as much vertical upheaval as a thrust fault.

"In general the concept is that strike-slip earthquakes do not generate significant tsunamis, and we thought it is of great importance to show that we do have this," Salamon said. "There was relatively small and limited damage here from this tsunami, but we should not ignore that this unique seismotectonic settings includes active normal faults along the gulf's shoulders as well as steep submarine slopes along which we have identified fresh scars that may have evidence of past tsunamis."

One of the most important pieces of information from the 1995 event, which allowed the researchers to perform their simulations, was a 1995 mareogram, or tidal gauge reading, that Salamon's student Eran Frucht discovered. These data gave them a way to judge the accuracy of their simulations. The researchers concluded, for instance, that the peak three to four-meter wave height in Nuweiba Harbor may have been a local phenomenon affected by the shape of the harbor or by a nearby underwater landslide.

Salamon and his colleagues now are conducting a larger scale earthquake and tsunami hazard evaluation for the entire Gulf of Elat-Aqaba region. The evaluation is particularly important because there are few historical records in the area on past tsunami size and frequency, to guide future estimates.

The worst case scenario, said Salamon, would be an earthquake on a fault that crosses from the land into the gulf, which could produce severe ground shaking in the surrounding cities, submarine landslides and subsidence of the coastline that amplifies inundation from a tsunami.

Salamon said that the hazard evaluation would give scientists in all four countries surrounding the gulf a better understanding on whether to expect this worst-case scenario. "We thought that if we do this kind of research, it would be relevant for our neighbors as well."

Future tsunamis possible in the Red Sea's Gulf of Elat-Aqaba 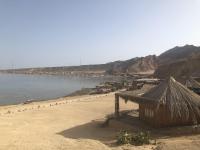