Researchers at North Carolina State University and Duke University have developed a way to assemble and pre-program tiny structures made from microscopic cubes - "microbot origami" - to change their shape when actuated by a magnetic field and then, using the magnetic energy from their environment, perform a variety of tasks - including capturing and transporting single cells.

The findings, published today in Science Advances, pave the way for microbots and micro-origami assemblies that can serve as cell characterization tools, fluid micromixers, and components of artificial muscles and soft biomimetic devices.

"This research is about a topic of current interest - active particles which take energy from their environment and convert it into directional movement," said Orlin Velev, INVISTA Professor of Chemical and Biomolecular Engineering at NC State and co-corresponding author of the paper.

To create the microbot origami, the researchers started with microscopic polymer cubes that are metallic on one side, essentially allowing the metallic side to act as a magnet. Depending on their positioning, the cubes can be assembled in many different ways.

"Since they are magnetized and interacting, the cubes store energy," Velev said. "Tiny particles in the shape of cubes can attach together in sequences where they face in different directions to make, for example, clusters that behave like a tiny Pac-Man: You can open them by applying a magnetic field and then let them close by turning the magnetic field off. They close because they are releasing the stored magnetic energy. Thus, you inject internal energy every time you open the microclusters and release it when they close."

"We've shown here a prototype of self-folding microbot," Velev said, "that can be used as a microtool to probe the response of specific types of cells, like cancer cells, for instance."

"Previously reported microrobotic structures have been limited to performing simple tasks such as pushing and penetrating objects due to their rigid bodies. The ability to remotely control the dynamic reconfiguration of our microbot creates a new 'toolbox' for manipulating microscale objects and interacting with its microenvironment," said Koohee Han, a Ph.D. candidate at NC State and first author of the paper.

"As the microbot folds, it can compress liquids or solids and you can use it as a tool to measure bulk mechanical properties, like stiffness," said Wyatt Shields, a postdoctoral researcher at Duke University and NC State University who co-authored the paper. "In some ways, it is a new metrological tool for gauging elasticity at the microscopic level."

Velev says that future work will concentrate on making the particles move on their own, rather than steering them with magnetic fields. Han is working on making bots that self-propel in complex fluids with non-Newtonian behavior. Shields is studying how the dynamics of the microbot reshaping could be used to study the microstructure of surrounding macromolecules.

The research is funded by the National Science Foundation under grant CBET-1604116, by the Research Triangle Materials Research Science and Engineering Center on Programmable Soft Matter under grant DMR-1121107, and by an NSF graduate fellowship (GRF-1106401).

"Sequence-encoded colloidal origami and microbot assemblies from patchy magnetic cubes"
Authors: Koohee Han and Orlin D. Velev, North Carolina State University; C. Wyatt Shields IV, Duke University; Nidhi Diwakar, Research Triangle Materials Research Science and Engineering Center; Bhuvnesh Bharti, Louisiana State University; Gabriel P. López, University of New Mexico
Published: Aug. 4, 2017, online in Science Advances
DOI: 10.1126/sciadv.1701108
Abstract: Colloidal-scale assemblies that reconfigure on demand may serve as the next generation of soft "microbots," artificial muscles and other biomimetic devices. This requires precise arrangement of particles into structures that are pre-programmed to reversibly change shape when actuated by external fields. The design and making of colloidal-scale assemblies with encoded directional particle-particle interactions remains a major challenge. Here, we show how assemblies of metallo-dielectric patchy microcubes can be engineered to store energy through magnetic polarization and release it on-demand by microscale reconfiguration. The dynamic pattern of folding and reconfiguration of the chain-like assemblies can be encoded in the sequence of the cube orientation. The residual polarization of the metallic facets on the microcubes leads to local interactions between the neighboring particles, which is directed by the conformational restrictions of their shape after harvesting energy from external magnetic fields. Such structures can also be directionally moved, steered, and maneuvered by global forces from external magnetic fields. We illustrate these capabilities by examples of assemblies of specific sequences that can be actuated, reoriented and spatially maneuvered to perform microscale operations such as capturing and transporting live cells, acting as prototypes of microbots, micromixers and other active microstructures. 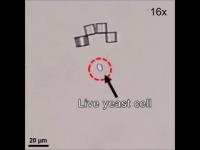