Ocean acidification may create an impact similar to extinction on marine ecosystems, according to a study released today by the University of California, Davis.

The study, published online in the journal Proceedings of the National Academy of Sciences, found that ocean acidification can degrade not only individual species, as past studies have shown, but entire ecosystems. This results in a homogenized marine community, dominated by fewer plants and animals.

"The background, low-grade stress caused by ocean acidification can cause a whole shift in the ecosystem so that everything is dominated by the same plants, which tend to be turf algae," said lead author Kristy Kroeker, a postdoctoral researcher at the Bodega Marine Laboratory at UC Davis.

"In most ecosystems, there are lots of different colorful patches of plants and animals -- of algae, of sponges, of anemones," Kroeker said. "With ocean acidification, you lose that patchiness. We call it a loss of functional diversity; everything looks the same."

In the waters surrounding Castello Aragonese, a 14th century castle off the coast of Italy, volcanic vents naturally release bubbles of carbon dioxide gas, creating different levels of acidity among the marine-animal and plant communities there. These gradients of acidity gave the scientists a glimpse of what a future marked by increasingly acidic ocean waters could look like, and how the creatures and plants living in those environments may react to it.

The researchers selected three reef zones--of low, high and extremely high acidity, representing world ocean conditions for the present day, 2100 and 2500, respectively. Then they removed animals and vegetation from the rocks there. Every few months for three years, Kroeker dived to the study plots to photograph them and watch how the plots in each zone recovered.

By examining how recovery differed among zones, the study found that acidic water reduced the number and variety of species. In the non-acidic plots, many different plants and animals, including turf algae, would colonize and grow. Calcareous species, such as sea urchins and snails, would then eat them, allowing for variety through time.

However, in both the high and extremely high acidic plots, fleshy turf algae increased steadily and overtook the zones, as the urchins and other grazers were either not present or did not graze on the algae while in these zones.

Calcareous grazers play key roles in maintaining the balance within marine ecosystems. They are also considered among the most vulnerable species to ocean acidification.

"Our research is showing that if the role of these grazers changes with ocean acidification, you might expect to see cascading effects of the whole ecosystem," Kroeker said. "If the pattern holds for other calcareous grazers, this has implications for other ecosystems, as well."

Co-authors in the study include Maria Cristina Gambi of the Stazione Zoologica Anton Dohrn in Naples, Italy, and Fiorenza Micheli of Stanford University.

The research was supported by a National Science Foundation Graduate Research Fellowship, a Stanford University Chambers Fellowship, a Pew Fellowship in Marine Conservation and the Stazione Zoologica Anton Dohrn.

The study, "Community dynamics and ecosystem simplification in a high-CO2 ocean," will be available at http://www.pnas.org.

For more than 100 years, UC Davis has engaged in teaching, research and public service that matter to California and transform the world. Located close to the state capital, UC Davis has more than 33,000 students, more than 2,500 faculty and more than 21,000 staff, an annual research budget of nearly $750 million, a comprehensive health system and 13 specialized research centers. The university offers interdisciplinary graduate study and more than 100 undergraduate majors in four colleges -- Agricultural and Environmental Sciences, Biological Sciences, Engineering, and Letters and Science. It also houses six professional schools -- Education, Law, Management, Medicine, Veterinary Medicine and the Betty Irene Moore School of Nursing.

Glimpse into the future of acidic oceans shows ecosystems transformed 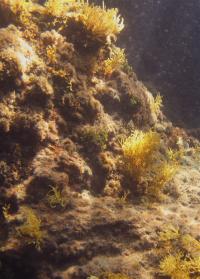