New research showing that that mercury levels are higher in some species of tuna could help consumers minimize their consumption of the silvery metal in their sushi and provide a powerful new tool for regulatory organizations. The new research—combining DNA barcoding at that American Museum of Natural History with analysis of mercury content at Rutgers University—is published in Biology Letters early online edition and shows surprisingly that tuna sushi purchased in supermarkets might be healthier than that from restaurants. The sushi made for supermarkets tends to be yellowfin tuna.

"We found that mercury levels are linked to specific species," says Jacob Lowenstein, a graduate student affiliated with the Museum. "So far, the U.S. does not require restaurants and merchants to clarify what species they are selling or trading, but species names and clearer labeling would allow consumers to exercise greater control over the level of mercury they imbibe."

"People who eat fish frequently have a particular need to know which species may be high in contaminants," says Michael Gochfeld, professor at Robert Wood Johnson Medical School. "Some agencies have been afraid that any mention of contaminants will discourage people from eating any fish.

Sushi samples for this research project were taken from 54 restaurants and 15 supermarkets in New York, New Jersey, and Colorado. The results are based on 100 samples, all of which were identified with DNA barcoding as either bigeye tuna (Thunnus obesus), yellowfin tuna (Thunnus albacares), or bluefin tuna species (Thunnus maccoyii, Thunnus orientalis, and Thunnus thynnus). All samples were tested for relative mercury content.

Combining mercury content and species identification in this study shows that all species exceed or approach levels permissible by Canada, the E.U., Japan, the U.S., and the World Health Organization. Mercury levels are significantly higher in bluefin akami (sushi from lean, dark red tuna) and all bigeye tuna samples than in bluefin toro (sushi from fatty tuna) and yellowfin tuna akami samples. This is probably because mercury accumulates differently in different tissue types: mercury has an affinity for muscle and not fatty tissue, so the leanest fish tend to have the highest concentration.

But there also seem to be other factors in play. Although yellowfin tuna is very lean, this species tends to have lower accumulation of mercury, likely because yellowfin are typically smaller than other tuna and are harvested at a younger age. Furthermore, yellowfin are tropical and do not thermoregulate like the warm-blooded bigeye tuna and bluefin tuna. Because bigeye and bluefin species eat three times more than yellowfin to maintain their energy level, they might bioaccumulate, or slowly increase the level of toxins over time.

"Although levels are highest in top-level predatory fish, some fish that are lower on the food chain have high levels," says Joanna Burger, professor at Rutgers University. "The levels of mercury in some tuna are sufficiently high to provide a health risk both to the fish themselves and to the predators that eat them, including humans, particularly those who eat fish frequently."

"We show how you can use DNA as a tool to uncover patterns of species-specific bioaccumulation," says Sergios-Orestis Kolokotronis, a geneticist at the Sackler Institute for Comparative Genomics at the Museum. "This is one of first applications of DNA barcodes in a non-academic setting—using this method in any human health context and not just for determining whether barcodes can quickly and accurately identify a species."

In addition to Kolokotronis, Gochfeld, Burger, and Lowenstein, authors include George Amato, director of the Sackler Institute for Comparative Genomics at the Museum, and Christian Jeitner of the Environmental and Occupational Health Sciences Institute at Rutgers University. This research was funded by the Alfred P. Sloan Foundation, the Richard Lounsbery Foundation, Columbia University, Rutgers University, and the National Institute for Environmental Health Sciences. The New York Times' food editor Marian Burros collected 20 of the samples for a story on mercury in sushi which were later barcoded and included in this analysis.

Mercury is higher in some tuna species, according to DNA barcoding 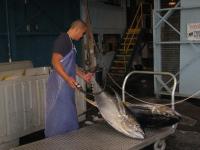