Extinct woolly mammoths and ancient American horses may have been grazing the North American steppe for several thousand years longer than previously thought. After plucking ancient DNA from frozen soil in central Alaska, a team of researchers used cutting-edge techniques to uncover "genetic fossils" of both species locked in permafrost samples dated to between 7,600 and 10,500 calendar years. This new evidence suggests that at least one population of these now-extinct mammals endured longer in the continental interior, challenging the conventional view that these and other large species, or megafauna, disappeared from the Americas about 12,000 years ago.

"We don't know how long it takes to pinch out a species," says Ross MacPhee, Curator of Mammalogy at the American Museum of Natural History. "Extinctions often seem dramatic and sudden in fossil records, but our study provides an idea of what an extinction event might look like in real time, with imperiled species surviving in smaller and smaller numbers until eventually disappearing completely."

At the end of the Pleistocene, the geological epoch roughly spanning 12,000 to 2.5 million years ago, many of the world's megafauna, such as giant sloths, saber-toothed cats, dire wolves, stag-moose, and mammoths, vanish from the geological record. Some large species such as Equus caballus, the species from which the domestic horse derives, became extinct in North America but persisted in small populations elsewhere. Because of the apparent sudden disappearance of many megafaunal species in North America, some scientists have proposed cataclysmic explanations like human overhunting, an extraterrestrial impact, and the introduction of novel infectious diseases. The swiftness of the extinctions, however, is not suggested directly by the fossils themselves but is inferred from radiocarbon dating of bones and teeth discovered on the surface or buried in the ground. Current "macrofossil" evidence places the last-known mammoths and wild horses between 13,000 and 15,000 years ago.

But hard remains of animals are rarely preserved, difficult to find, and laborious to accurately date because of physical degradation. Because of this, MacPhee and co-authors Eske Willerslev of the University of Copenhagen in Denmark, Richard Roberts of the University of Wollongong in Australia, and Duane Froese of the University of Alberta in Canada decided to tackle the problem by dating the "last survivors" through dirt. Frozen sediments from the far north of Siberia and Canada can preserve small fragments of animal and plant DNA exceptionally well, even in the complete absence of any visible organic remains, such as bone or wood.

"In principle, you can take a pinch of dirt collected under favorable circumstances and uncover an amazing amount of forensic evidence regarding what species were on the landscape at the time," says Willerslev, director of the Centre for GeoGenetics at the University of Copenhagen. "The use of ancient DNA offers the possibility of being able to sample previous life within the last 400,000 years, freeing us from having to rely on skeletal and other macrofossil evidence as the only way to collect information about species that are no longer with us."

In order to prospect for genetic fossils, the team collected soil cores from undisturbed Alaskan permafrost. Wind-blown Stevens Village, situated on the bank of the Yukon River, fit the bill perfectly. Here, sediments were sealed in permafrost soon after deposition. Two independent methods (radiocarbon and optically stimulated luminescence) were used to date plant remains and individual mineral grains found in the same layers as the DNA.

"With these two techniques, we can be confident that the deposits from which the DNA was recovered haven't been contaminated since these lost giants last passed this way," said Roberts, director of the Centre for Archaeological Science at the University of Wollongong. "It's a genetic graveyard, frozen in time."

Cores collected at Stevens Village offer a clear picture of the local Alaskan fauna at the end of the last ice age. The oldest sediments, dated to about 11,000 years ago, contain remnant DNA of Arctic hare, bison, and moose; all three animals were also found in higher, more recent layers, as would be expected. But one core, deposited between 7,600 and 10,500 years ago, confirmed the presence of both mammoth and horse DNA. To make certain that the integrity of this sample had not been compromised by geologic processes (for example, that ancient DNA had not blown into the surface soils), the team did extensive surface sampling in the vicinity of Stevens Village. No DNA evidence of mammoth, horse, or other extinct species was found in modern samples, a result that supports previous studies which have shown that DNA degrades rapidly when exposed to sunlight and various chemical reactions.

"The fact that we scored with only one layer is not surprising," says MacPhee. "When you start going extinct, there will be fewer and fewer feet on the ground, and thus less and less source material for ancient DNA such as feces, shed dermal tissues, and decaying bodies."

The team also developed a statistical model to show that mammoth and horse populations would have dwindled to a few hundred individuals by 8,000 years ago.

"At this point, mammoths and horses were barely holding on. We may actually be working with the DNA of some of the last members of these species in North America," says permafrost expert Froese, associate professor in the Department of Earth and Atmospheric Sciences at the University of Alberta. "The Yukon Flats includes large shifting river bars with an abundance of high quality forage where large mammals can and could make a living. There may have been a handful of similar sites in Alaska, hosting small remnant populations," says Froese.

"Dirt DNA has lots of exciting potential to contribute to extinction debates in other parts of the world too, as well as a range of archaeological questions," said Willerslev, who also points out that the approach is not restricted to looking back at the past. "We can also use it to make a list of modern species living in any particular location," he said. "This kind of information is really valuable for studies of animals that are hard to detect, and there are some neat forensic applications too." 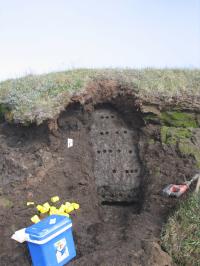