A recent NASA mission to the dwarf planet Ceres found brilliant, white spots of salts on its surface. New research led by The University of Texas at Austin in partnership with NASA's Jet Propulsion Laboratory (JPL) delved into the factors that influenced the volcanic activity that formed the distinctive spots and that could play a key role in mixing the ingredients for life on other worlds.

The volcanoes on Ceres are cryovolcanoes, a type of volcano that forms on planetary bodies with icy shells and that moves salty water known as cryomagma from underground reservoirs to the surface. Scientists think that cryovolcanoes on Jupiter's icy moon Europa could help foster chemical mixing that could make complex molecules needed for life. Learning more about how these volcanoes work on Ceres--which is a simpler geological environment than Europa--could help scientists get a handle on the primary forces that drive their activity.

"Cryovolcanism looks to be a really important system as we look for life," said lead author Marc Hesse, an associate professor at the UT Jackson School of Geosciences. "So we're trying to understand these ice shells and how they behave."

The final version of the research was published online on Feb.8 in the journal Geophysical Research Letters. The research was co-authored by Julie Castillo-Rogez, a planetary scientist at NASA's JPL.

At 585 miles across, Ceres is the largest planetary body in the asteroid belt between Mars and Jupiter. Forged billions of years ago from rock and ice and far enough from the influence of other planets, scientists had thought that Ceres' days of active geology had come to close. But the NASA Dawn mission changed that view when the space probe sent back pictures of bright, white spots at the bottom of impact craters. The spots turned out to be the remnants of cryomagma.

The location of the spots at or near the center of crater basins suggests that the heat and energy generated by asteroid impacts could jumpstart geology on Ceres, creating reservoirs of cryomagma that were then brought to the surface by conduits such as fractures.

The new research looked specifically at the deposits on the floor of the 90-mile-wide crater Occator, which was formed about 20 million years ago. However, the deposits here are as young as 4 million years old, indicating a relatively recent formation geologically speaking with respect to the crater itself. Earlier research conducted by other scientists found that the conditions on Ceres wouldn't allow for the cryomagma generated by the Occator impact to exist for more than about 400,000 years.

The age discrepancy between salt deposits and impact timing raises a question: How could a reservoir of melt stay in a liquid state for millions of years after impact on an otherwise geologically stagnant world?

In their new paper, Hesse and Castillo-Rogez were able to significantly extend the life of the cryomagma by including more up-to-date details on Ceres' crustal chemistry and physics.

"It's difficult to maintain liquid so close to the surface," said Castillo-Rogez. "But our new model includes materials inside the crust that tend to act as insulators consistent with the results from the Dawn observations."

The new calculations indicate that the cryomagma of Occator could last up to 10 million years--a value that doesn't close the time gap completely, but that indicates that the additional data helps make a more realistic cooling timeline.

"Now that we're accounting for all these negative feedbacks on cooling--the fact that you release latent heat, the fact that as you warm up the crust it becomes less conductive--you can begin to argue that if the ages are just off by a few million years you might get it," Hesse said.

Jennifer Scully, a planetary geologist at NASA's JPL who studies Ceres but was not involved with the study, said that the findings are a great contribution toward unpacking the geologic history of an alien world.

"They used more up-to-date data to create their model," said Scully. "This will help in the future to see if all of the material involved in the observed deposits can be explained by the impact, or does this require a connection to a deeper source of material. It's a great step in the right direction of answering that question."

The National Science Foundation and NASA funded the research. 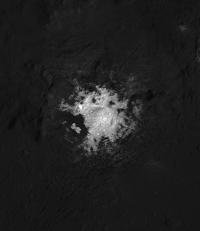