Supercomputers captured the public imagination when Google's AlphaGo supercomputer won South Korean Go grandmaster Lee Se-Dol in four out of five matches. But behind the scenes, supercomputers have also transformed the way research is done, in applications ranging from tsunami prediction to clinical drug discovery.

"As is the case with the rest of science and technology, the supercomputing center of gravity is shifting to Asia, with China's Sunway TaihuLight currently ranked number one in the world," said Dr. Juliana Chan, Editor-in-Chief of Supercomputing Asia. "The timing is perfect for us to launch a new print product introducing our readers to the exciting potential of supercomputers and the impressive progress being made right here in Asia."

"Aside from well-established supercomputing powerhouses like Japan and emerging new players like China, Asian countries like Singapore and South Korea have recognized the transformational power of supercomputers and invested accordingly. We hope that this new publication will provide a unique insight into the exciting developments in this region," said Dr. Rebecca Tan, Managing Editor of Supercomputing Asia. 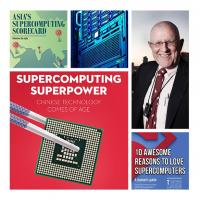