NASA-NOAA's Suomi NPP or S-NPP satellite provided infrared and night-time imagery of Typhoon Kammuri shortly after it made landfall in the Philippines.

On Dec 2 at 7 a.m. EST (1200 UTC) Kammuri, known as Tisoy in the Philippines, had maximum sustained winds near 115 knots (132 mph), and that made it a Category 4 hurricane on the Saffir Simpson Hurricane Wind Scale.

Per the 10 a.m. EST (1500 UTC) bulletin from the Philippine Atmospheric, Geophysical and Astronomical Services Administration (PAGASA), at 11 p.m. PHT, Philippine  Standard Time. Kammuri (Tisoy) made landfall near Gubat, Sorsogon which is located in the extreme southeastern part of Luzon, Philippines

Views of a Typhoon from NASA Satellites

NASA-NOAA's Suomi NPP or S-NPP satellite saw Typhoon Kammuri on Dec. 2 at 12:07 p.m. EST (1707 UTC). Infrared and nighttime images were created by William Straka III, Researcher at the University of Wisconsin - Madison, Space Science and Engineering Center (SSEC), Cooperative Institute for Meteorological Satellite Studies (CIMSS). The infrared image showed the eye of Kammuri (Tisoy) near Gubat, Sorsogon, in the southeastern part of Luzon. A thick,wide band of powerful thunderstorms circled the entire eye, where cloud top temperatures were as cold as or colder than 210 Kelvin (minus 81.6 degrees Fahrenheit/minus 63.1 degrees Celsius). NASA research has shown that cloud top temperatures that cold or colder have the ability to generate heavy rainfall.

Straka noted that several prominent features include tropospheric gravity waves along with multiple overshooting cloud tops. In addition, there were also some mesospheric gravity waves. Infrared data revealed coldest temperatures of cloud tops were as cold as 119 Kelvin (minus 117.6 degrees Fahrenheit/minus 83.1 degrees Celsius) in the western and southwestern quadrants of the storm. Those were the most powerful storms that likely produced the highest rainfall rates.

In the nighttime image from the S-NPP satellite, Kammuri's eye was visible near Gubat, Sorsogon, in southeastern Luzon. City lights could be seen to the north and south of the storm, in Northern Luzon, Western and Central Visayas regions, and Northern Mindanao. The eastern Visayas and Bicol regions were covered by Kammuri's clouds.

On Dec. 2 at 12:11 a.m. EST (0511 UTC), the Atmospheric Infrared Sounder or AIRS instrument aboard NASA's Aqua satellite provided a look at the cloud top temperatures in Typhoon Kammuri. A thick, wide band of powerful thunderstorms (red) circled the entire eye, where cloud top temperatures were as cold as or colder than 210 Kelvin (minus 81.6 degrees Fahrenheit/minus 63.1 degrees Celsius), which confirmed the Suomi NPP satellite data.

PAGASA continues to track Kammuri in order to assess the impacts on the various islands in the path of the storm.  On Dec. 3, PAGASA maintained the following warnings.

Status of Kammuri (Tisoy) on Dec. 3

Typhoon Kammuri continues to weaken as it emerges on the western edges of the Philippine archipelago. The storm is forecast to turn to the east-northeast and is expected to quickly turn to the south-southwest and dissipate. 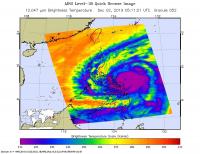