(Millbrook, NY) Pacific salmon and trout are vulnerable to infectious hematopoietic necrosis virus (IHNV), a pathogen that can be lethal to juvenile fish. A recent Ecology and Evolution study is the first to explore how IHNV spreads among juvenile hatchery-raised fish in the Pacific Northwest, where high rates of infection and mortality can occur.

Cary Institute disease ecologist and coauthor Shannon LaDeau explains, "IHNV is the most significant viral pathogen of Pacific salmon and trout in North America and has likely been present in Pacific salmon for thousands of years. However, ecosystem alterations and human activities have impacted its spread, especially in cultured fish populations."

Steelhead trout and Chinook salmon, the most abundant IHNV-susceptible species in the Columbia River Basin and adjacent coastal rivers, were the focus of the study. There are extensive state, federal, and tribal hatchery programs that rear these species to help rebuild wild stock and mitigate loss of habitat due to activities such as hydroelectric power generation.

Gael Kurath, senior research microbiologist with the USGS Western Fisheries Research Center and coauthor on the paper notes, "IHNV disease costs Pacific Northwest conservation efforts and the global aquaculture industry millions of dollars annually. These expenses include direct losses due to fish mortality or culling of infected fish and eggs, costs of routine surveillance and testing, and program losses due to restrictions of movement of infected fish.

Studying viral transmission in hatchery-reared fish presents unique challenges. Author Rachel Breyta, now at Oregon State University, led the study while a Postdoctoral Fellow at the Cary Institute. She explains, "While hatcheries can be disinfected and controlled, juveniles migrate to the Pacific Ocean as part of their life cycle. When they return to hatcheries to spawn as adults, complicating variables - such as swimming through IHNV-infested waters - come into play."

When trout and salmon are infected with IHNV, blood-producing tissues in the kidneys, liver, and spleen deteriorate. In juveniles, this can lead to death. Once infected, there is no effective treatment; prevention is the main management strategy. Only juvenile Pacific salmon display symptoms of infection; asymptomatic adults can maintain and transmit the virus.

IHNV is quick to evolve, allowing it to adapt to the host fish's immune system as well as to new environments and host species. Infected fish shed the virus into the water, where it can survive long enough to infect new fish hosts. Juvenile fish can also contract the virus through transmission from parent to offspring via infectious reproductive fluids.

To prevent IHNV outbreaks, many hatcheries rely on water security - using water sources at low risk of being IHNV-contaminated, such as a spring or well water, and biosecurity - disinfecting eggs with iodine to kill the virus. Despite these measures, IHNV persists, partly because many older conservation hatcheries do not have access to secure water and operate with river or creek water that contains fish that are potential IHNV hosts.

Samples of both wild and hatchery-raised fish were included in this study; however, there is not enough data on wild populations to determine whether infection of wild fish is a result of isolated hatchery spillover events, or if wild populations maintain IHNV throughout the study region.

Breyta explains, "By identifying the strain of the virus infecting a fish and cross-referencing this information with known locations of different IHNV strains across the landscape, we can map where a fish became infected, the potential transmission pathway, and other locations at risk of IHNV outbreaks."

The landscape-level analysis found that all three pathways were efficient at spreading IHNV. Data suggest that returning adults were likely the most frequent source of viral introduction to juveniles at hatcheries, followed by within-hatchery juvenile-to-juvenile transmission, which accounts for the highest disease incidence and is likely responsible for maintaining high recurrence rates at specific hatcheries in the study region.

"Infected juvenile fish and infected migrating adult fish are likely to play important roles in spreading IHNV," LaDeau explains. "We expect that our efforts to better understand viral transmission will lead to more targeted management strategies. Disrupting transmission is key to stopping the expansion of this virus, which is a conservation threat and an economic liability."

This research was supported by the U.S. Geological Survey Western Fisheries Research Center and the Washington Cooperative Fish and Wildlife Research Unit at the University of Washington. Funding was provided, in part, by the USDA (grant 2012-67015-19960) as part of the joint USDA-NSF-NIH Ecology and Evolution of Infectious Disease program. The data used in this study is available at http://onlinelibrary.wiley.com/doi/10.1002/ecy.1634/full, doi:10.1002/ecy.1634 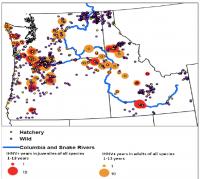