Venus is often referred to as Earth's twin because both planets share a similar size and sur-face composition. Also, they both have atmospheres with complex weather systems. But that is about where the similarities end: Venus is one the most hostile places in our solar system. Its atmosphere consists of 96.5 percent carbon dioxide, with surface temperatures of con-stantly about 500 degrees Celsius. Venus is a slowly rotating planet -- it needs about 243 ter-restrial days to complete one rotation. We would expect its atmosphere to rotate with the same rhythm, but in fact it takes only four days. This phenomenon is called superrotation, and it causes substantial turbulences in the planet's atmosphere. The scientists do not yet fully understand its origin and motor, but are working on an answer to this puzzle. The many waves in the planet's atmosphere may play an important role.

The research results were generated by an international collaboration headed by the Institute of Space and Astronautical Science, Japan Aerospace Exploration Agency (JAXA). Experts in space and astronautical science and astrophysics from universities and institutions in Ja-pan, Spain, Italy, and Germany are cooperating in the project. From Germany, the Rhenish Institute for Environmental Research at the University of Cologne and the Center for Astron-omy and Astrophysics at Technische Universität Berlin are involved.

The research team analysed data generated by the spacecraft Venus Express to investigate components of Venus's complex atmosphere, including thermal measurements with regard to horizontal and vertical wave patterns. The data also included first global measurements from the tracking of individual features in thermal emission images at 3.8 and 5.0 μm (micrometer) during 2006-2008 and 2015.

Vertical information in unison with horizontal data help to understand the nature of the ob-served wave patterns. The vertical information from the VeRa instrument (an atmosphere experiment where radio waves sent by spacecraft Venus Express are being analysed) could help to identify the observed waves as gravity waves. This, in turn, is crucial for the analysis of atmospheric processes.

Dr. Silvia Tellmann is Vice-Director of the Department of Planetary Research at the Rhenish Institute for Environmental Research at the University of Cologne. She is an expert on the structure, dynamics, and circulation of planetary atmospheres and a co-author of the study. 'We were able to relate the stationary gravity waves found at higher altitudes with the surface elevations of Venus', she says. 'Hence, the waves can be explained with wind currents caused by topographical obstacles. We assume that these stationary waves are substantial for the continuity of the superrotation in the atmosphere of Venus.' 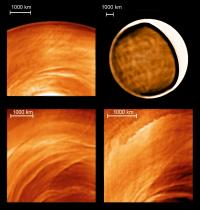 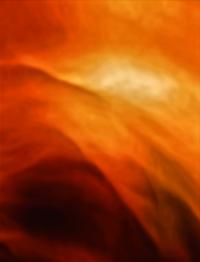