Scientists have discovered the origin of a unique type of cell known for its ability to support regeneration in the central nervous system. Their findings, published this week in the journal Proceedings of the National Academy of Sciences USA (PNAS), raise the possibility of obtaining a more reliable source of these cells for use in cell transplantation therapy for spinal cord injuries.

Olfactory ensheathing cells (OECs), as the name suggests, ensheath and protect the nerve fibres in the olfactory nerve, which transmit olfactory (smell) information to the brain from receptor cells sitting in the lining of the nose. Excitingly, OECs can promote nerve repair when transplanted into the damaged spinal cord. They can also be grown in dishes from pieces of nasal lining but, unfortunately, in such small quantities that this may not be a viable option for use in treatments.

Dr Clare Baker, from the Department of Physiology, Development and Neuroscience at the University of Cambridge, lead author of the study, said: "In theory, one should be able to purify OECs from a patient's nose and transplant them into the damaged spinal cord to promote nerve repair, without any fear of graft rejection.

"Unfortunately, there aren't very many OECs in the nasal lining, and this tissue also contains other peripheral nerve fibres, ensheathed by cells that look very similar to OECs but which are less effective at promoting spinal cord repair. As a result, it has thus far proven difficult to purify sufficiently large numbers of OECs from the nasal lining for effective use in cell transplantation therapy."

For the last 25 years, OECs have been thought to be formed by the nasal lining itself. The new research, however, reveals a different origin for OECs that may enable scientists in the future to produce them in large quantities from adult stem cells.

The researchers, funded by the Wellcome Trust and the Isaac Newton Trust, have discovered that, like all other cells ensheathing peripheral nerve fibres, OECs are actually derived from a group of embryonic stem cells called "neural crest cells". Neural crest stem cells persist in adult skin and hair follicles, and other researchers have already shown that it is possible to isolate these stem cells and grow them in the lab.

Dr Baker said, "The next step is to work out how to turn these stem cells into OECs. To do this, we need to investigate how this process happens normally in the developing embryo."

Dr Baker continued, "It is important to note that it will take many years for our research to have any impact on therapy for people with damaged spinal cords. However, we are hopeful that our discovery provides a fresh starting point for new research into ways of purifying large numbers of these cells for use in treatments."

In order to determine the origin of OECs, the scientists tagged embryonic neural crest cells with 'green fluorescent protein' (GFP), so that only neural crest cells and their descendants glowed green under ultraviolet light. They did this in chicken embryos by transplanting GFP-labelled neural crest cells into unlabelled host embryos; they also looked at mouse embryos in which, through a genetic trick, the only cells that expressed GFP were neural crest cells.

1. The paper 'Neural crest origin of olfactory ensheathing glia' will be published in the Early Edition the week of 15 November 2010 in Proceedings of the National Academy of Sciences (PNAS).

2. The Wellcome Trust is a global charitable foundation dedicated to achieving extraordinary improvements in human and animal health. It supports the brightest minds in biomedical research and the medical humanities. The Trust's breadth of support includes public engagement, education and the application of research to improve health. It is independent of both political and commercial interests. www.wellcome.ac.uk

3. The Isaac Newton Trust was established in 1988 by Trinity College. The objects of the Trust are to promote learning, research and education in the University of Cambridge. The Trust makes grants for research purposes within Cambridge University, administers the undergraduate Bursary Scheme and also offers a number of other funding schemes for the University and its constituent Colleges. http://www.newtontrust.cam.ac.uk/ 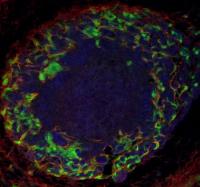