For centuries it has been thought that culture is what distinguishes humans from other animals, but over the past decade this idea has been repeatedly called into question. Cultural variation has been identified in a growing number of species in recent years, ranging from primates to cetaceans. Chimpanzees, our closest living relatives, show the most diverse cultures aside from humans, most notably, in their use of a wide variety of tools.

The method traditionally used to establish the presence of culture in wild animals compares behavioural variation across populations and excludes all behavioural patterns that can be explained by genetic or environmental differences across sites. Nevertheless, it is impossible to conclusively rule out the influence of genetics and environmental conditions in geographically distant populations.

She and colleagues from Kyoto University and Freie Universität Berlin compared the length of tools used for 'ant-dipping' between two neighbouring chimpanzee communities, M-group and S-group, in the Kalinzu Forest, Uganda. Dipping for army ants is one of the hallmark examples of culture in chimpanzees and involves the use of a stick to extract the highly aggressive army ants from their underground nests.

Previous research has shown that ant-dipping tool length varied across chimpanzee study sites in relation to the army ant species (Dorylus spp.) that were present. So Koops compared the availability of the different species of army ants and the length of dipping tools used in the two adjacent chimpanzee communities.

The researchers found that M-group tools were significantly longer than S-group tools, despite identical army ant species availability. Considering the lack of ecological differences between the two communities, the tool length difference was concluded to be cultural. "Our findings highlight how cultural knowledge can generate small-scale cultural diversification in neighbouring groups," said Koops.

"Given the close evolutionary relationship between chimpanzees and humans, insights into what drives cultural diversification in our closest living relatives will in turn shed light on how cultural differences emerge and are maintained between adjacent groups in human societies," said Koops, who conducted the work at Cambridge University's Division of Biological Anthropology and at Zurich University's Anthropological Institute and Museum.

The research is published today in the Nature journal Scientific Reports. 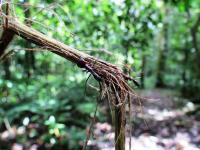