A team of researchers from Osaka University and Kirin Holdings Company, Limited demonstrated that the texture-formation in a pint glass of Guinness beer is induced by flow of a bubble-free fluid film flowing down along the wall of the glass, a world first. This phenomenon is found to be analogous to roll waves commonly observed in water sliding downhill on a rainy day. Their research results were published in Scientific Reports.

Guinness beer, a dark stout beer, is pressurized with nitrogen gas. When poured Guinness beer into a pint glass, small-diameter bubbles (only 1/10 the size of those in carbonated drinks such as soda and carbonated water) disperse throughout the entire glass and the texture motion of the bubble swarm moves downwards.

Although some models to explain how the downward movement of a bubble swarm as waves are caused in Guinness beer have been proposed, the mechanism underlying the texture-formation was an open problem.

Because the opaque and dark-colored Guinness beer obstructs the physical observation in a glass and huge computation using supercomputers is necessary to conduct numerical simulation of flows including a vast number of small bubbles in the beer, the team of researchers led by Tomoaki Watamura produced transparent "pseudo-Guinness fluid" by using light particles and tap water. They filmed the movement of liquid with a high-speed video camera applying laser-induced-fluorescence method in order to accurately measure the movement of fluid. In addition, using molecular tags, they visualized the irregular movement of the fluid.

With these methods, the team poured pseudo-Guinness fluid in an inclined container to observe how the texture formed. The texture-formation appeared only in the region of about 1 mm away from the inclined wall and didn't appear in the vertical wall vicinity.

They also observed a clear-fluid (bubble-free) film flow down along the inclined wall in the inclined wall vicinity, capturing velocity and thickness of bubble-free film flowing downward. While the texture appeared when the glass inclination angles were small, it did not when they were large, demonstrating that the texture-formation in a glass of Guinness beer was caused by the roll-wave instability of the gravity current.

Lead author Watamura says, "There are a large number of small objects in nature, such as fine rock particles transported from rivers to the sea and microorganisms living in lakes and ponds. Comprehending and regulating the movement of small objects is important in various industrial processes as well. Our research results will be useful in understanding and controlling flows of bubbles and particles used in industrial processes as well as protein crystallization and cell cultivation used in the field of life science."

Mystery of texture of Guinness beer: inclination angle of a pint glass is key to solution 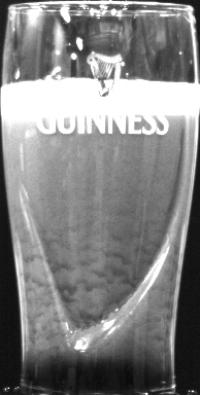