Contrary to the belief of many scientists (as well as many members of the public), new research confirms that Africa has two—not one—species of elephant. Scientists from Harvard Medical School, the University of Illinois, and the University of York in the United Kingdom used genetic analysis to prove that the African savanna elephant and the smaller African forest elephant have been largely separated for several million years.

The researchers, whose findings appear online in PLoS Biology, compared the DNA of modern elephants from Africa and Asia to DNA that they extracted from two extinct species: the woolly mammoth and the mastodon. Not only is this the first time that anyone has generated sequences for the mastodon nuclear genome, but it is also the first time that the Asian elephant, African forest elephant, African savanna elephant, the extinct woolly mammoth, and the extinct American mastodon have been looked at together.

"Experimentally, we had a major challenge to extract DNA sequences from two fossils—mammoths and mastodons—and line them up with DNA from modern elephants over hundreds of sections of the genome," says research scientist Nadin Rohland of the Department of Genetics at Harvard Medical School.

According to David Reich, associate professor in the same department, "The surprising finding is that forest and savanna elephants from Africa—which some have argued are the same species—are as distinct from each other as Asian elephants and mammoths."

Researchers only had DNA from a single elephant in each species, but had collected enough data from each genome to traverse millions of years of evolution to the time when elephants first diverged from each other.

"The divergence of the two species took place around the time of the divergence of the Asian elephant and woolly mammoths," says Professor Michi Hofreiter, who specializes in the study of ancient DNA in the Department of Biology at York. "The split between African savanna and forest elephants is almost as old as the split between humans and chimpanzees. This result amazed us all."

The possibility that the two might be separate species was first raised in 2001, but this is the most compelling scientific evidence so far that they are indeed distinct.

"We now have to treat the forest and savanna elephants as two different units for conservation purposes," says Alfred Roca, assistant professor in the Department of Animal Sciences at the University of Illinois. "Since 1950, all African elephants have been conserved as one species. Now that we know the forest and savanna elephants are two very distinctive animals, the forest elephant should become a bigger priority for conservation purposes."

This research was funded by the Max Planck Society and by a Burroughs Wellcome Career Development Award in Biomedical Science. 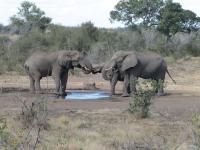