Researchers reporting in Current Biology on August 3 have named a new genus and species of armored dinosaur. The 110-million-year-old Borealopelta markmitchelli discovered in Alberta, Canada, on view at the Royal Tyrrell Museum of Palaeontology, belongs to the nodosaur family. Now, an analysis of the 18-foot-long (5.5 m) specimen's exquisitely well-preserved form, complete with fully armored skin, suggests that the nodosaur had predators, despite the fact that it was the "dinosaur equivalent of a tank," weighing in at more than 2,800 pounds (1,300 kg).

The researchers came to that conclusion based on studies of the dinosaur's skin, showing that Borealopelta exhibited countershading, a common form of camouflage in which an animal's underside is lighter than its back. The scientists say the discovery suggests that the nodosaur faced predation stress from meat-eating dinosaurs.

"Strong predation on a massive, heavily-armored dinosaur illustrates just how dangerous the dinosaur predators of the Cretaceous must have been," says Caleb Brown (@Brown_Caleb_M ), a scientist at the Royal Tyrrell Museum (@RoyalTyrrell).

The specimen was found by accident on March 21, 2011, by mining machine operator Shawn Funk at the Suncor Millennium Mine in Alberta. He noticed that there was something unusual about some of the rock formations. The Royal Tyrrell Museum was notified and sent a crew, including Curator of Dinosaurs Donald Henderson, to take a look. They soon realized that the rocks contained an armored dinosaur.

"Finding the remains of an armored dinosaur that was washed far out to sea was huge surprise," Henderson says. "The fact that it was so well preserved was an even bigger surprise."

The real work began when the specimen arrived back at the museum. Over the last five and a half years, museum technician Mark Mitchell spent more than 7,000 hours slowly and gently removing rock from around the specimen to reveal the exceptional, fossilized dinosaur inside. The new species is named in Mitchell's honor.

The specimen now represents the best-preserved armored dinosaur ever found, and one of the best dinosaur specimens in the world, the researchers say.

"This nodosaur is truly remarkable in that it is completely covered in preserved scaly skin, yet is also preserved in three dimensions, retaining the original shape of the animal," says Brown. "The result is that the animal looks almost the same today as it did back in the Early Cretaceous. You don't need to use much imagination to reconstruct it; if you just squint your eyes a bit, you could almost believe it was sleeping... It will go down in science history as one of the most beautiful and best preserved dinosaur specimens--the Mona Lisa of dinosaurs."

The condition of the specimen made it possible for Brown, Henderson, and an international team of colleagues to document the pattern and shape of scales and armor across the body. They also used chemical analysis of organic compounds in the scales to infer the dinosaur's pigmentation pattern.

Those studies revealed that the dinosaur had reddish-brown-pigmented skin with countershading across its the body. Although countershading is common, the findings come as surprise because Borealopelta's size far exceeds that of countershaded animals alive today. It suggests the dinosaur was under enough pressure from predators to select for concealment.

The remarkable specimen is sure to inspire many more studies by Brown's team and others. For instance, researchers are examining the dinosaur's preserved gut contents to find out the nature of its last meal, and working to characterize the body armor in even greater detail.

"This remarkable specimen illustrates just how unique and important the fossil record of Alberta is, and highlights the mandate of the Museum in the research, preservation, and education of these amazing resources," said Andrew Neuman, executive director at the Royal Tyrrell Museum.

The research was supported through the National Geographic Society. 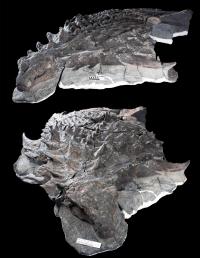