The world's smallest bears can exactly mimic another bear's facial expressions, casting doubt on humans and other primates' supremacy at this subtle form of communication.

It is the first time such exact facial mimicry has been seen outside of humans and gorillas.

The research, by Dr Marina Davila-Ross and PhD candidate Derry Taylor, both at the University of Portsmouth, is published in Scientific Reports.

The researchers studied sun bears - a solitary species in the wild, but also surprisingly playful - for more than two years.

They found bears can use facial expressions to communicate with others in a similar way to humans and apes, strongly suggesting other mammals might also be masters of this complex social skill and, in addition, have a degree of social sensitivity.

Dr Davila-Ross said: "Mimicking the facial expressions of others in exact ways is one of the pillars of human communication. Other primates and dogs are known to mimic each other, but only great apes and humans, and now sun bears, were previously known to show such complexity in their facial mimicry.

"Because sun bears appear to have facial communication of such complexity and because they have no special evolutionary link to humans like monkeys are apes, nor are they domesticated animals like dogs, we are confident that this more advanced form of mimicry is present in various other species. This, however, needs to be further investigated.

"What's most surprising is the sun bear is not a social animal. In the wild, it's a relatively solitary animal, so this suggests the ability to communicate via complex facial expressions could be a pervasive trait in mammals, allowing them to navigate their societies."

The bears, aged 2-12, were housed in Bornean Sun Bear Conservation Centre in Malaysia in which enclosures were large enough to allow bears to choose whether to interact or not.

Despite the bears' preference in the wild for a solitary life, the bears in this study took part in hundreds of play bouts, with more than twice as many gentle play sessions compared to rough play.

During these encounters, the research team coded two distinct expressions - one involving a display of the upper incisor teeth, and one without.

The bears were most likely to show precise facial mimicry during gentle play.

Mr Taylor said such subtle mimicking could be to help two bears signal that they are ready to play more roughly, or to strengthen social bonds.

"Sun bears are an elusive species in the wild and so very little is known about them. We know they live in tropical rainforests, eat almost everything, and that outside of the mating season adults have little to do with one another.

"That's what makes these results so fascinating--they are a non-social species who when face to face can communicate subtly and precisely."

Sun bears, also known as honey bears, stand at 120-150 cm tall and weigh up to 80kg. They are endangered and live in the tropical forests of south-east Asia.

Social sophistication aside, sun bear numbers are dwindling due to deforestation, poaching and being killed by farmers for eating crops. Increasingly, new mother bears are killed so their cub can be taken and raised as a pet or kept in captivity as 'bile bears' where their bile is harvested for use in some Chinese medicines.

The field research was funded by the Royal Society and the Leakey Foundation.

Previous research at the University of Portsmouth showed dogs alter their facial expressions if they know someone is looking at them.

STILLS: Numerous pictures of sun bears taken by the researchers in Malaysia. Each one's CREDIT is in file name 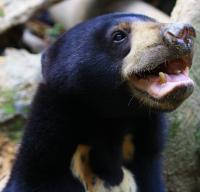