Researchers of the Institute for Quantum Optics and Quantum Information (IQOQI) in Innsbruck, Austria, used a calcium ion to simulate a relativistic quantum particle, demonstrating a phenomenon that has not been directly observable so far: the Zitterbewegung. They have published their findings in the current issue of the journal Nature.

In the 1920s quantum mechanics was already established and in 1928 the British physicist Paul Dirac showed that this theory can be merged with special relativity postulated by Albert Einstein. Dirac's work made quantum physics applicable to relativistic particles, which move at a speed that is comparable to the speed of light. The Dirac equation forms the basis for groundbreaking new insights, e.g. it provides a natural description of the electron spin and predicts that each particle also has its antiparticle (anti matter). In 1930, as a result of the analysis of the Dirac equation, the Austrian Nobel laureate Erwin Schrödinger first postulated the existence of a so called Zitterbewegung (quivering motion), a kind of fluctuation of the motion of a relativistic particle. "According to the Dirac equation such a particle does not move in a linear fashion in a vacuum but 'jitters' in all three dimensions," Christian Roos from the Institute for Quantum Optics and Quantum Information (IQOQI) of the Austrian Academy of Sciences (ÖAW) explains. "It is not clear whether this Zitterbewegung can be observed in real systems in nature."

Quantum simulation of a particle

Physical phenomena are often described by equations, which may be too complicated to solve. In this case, researchers use computer simulations to answer open questions. However, even for small quantum systems, classical computers have not enough power to manage the processing of the data; thus, scientists, such as Richard Feynman, proposed to simulate these phenomena in other quantum systems experimentally. The preconditions for doing this – detailed knowledge about the physics of these systems and an excellent control over the technology and set-up - have been set by the research group headed by Rainer Blatt by conducting experiments with quantum computers over the last few years; they are now able to carry out quantum simulations experimentally. "The challenges with these experiments are to recreate the equations in the quantum system well, to have a high level of control over the various parameters and to measure the results," Christian Roos says. The experimental physicists of the IQOQI trapped and cooled a calcium ion and in this well-defined state, a laser coupled the state of the particle and the state of the relativistic particle to be simulated. "Our quantum system was now set to behave like a free relativistic quantum particle that follows the laws of the Dirac equation," Rene Gerritsma explains, a Dutch Postdoc working at the IQOQI and first author of the work published in Nature. Measurements revealed the features of the simulated particle. "Thereby, we were able to demonstrate Zitterbewegung in the experimental simulation and we were also able to determine the probability of the distribution of a particle," Gerritsma says. In this very small quantum system the physicist simulated the Dirac equation only in one spatial dimension. "This simulation was a proof-of-principle experiment," Roos says, "which, in principle, can also be applied to three-dimensional dynamics if the technological set-up is adjusted accordingly."

Due to the extremely high level of control over the physical regime of the simulated particle, the scientists were able to modify the mass of the object and to simulate antiparticles. "In the end, our approach was very simple but you have to come up with the idea first," says Christian Roos, whose team of scientists was inspired by a theoretical proposal of a Spanish group of researchers. The work was supported by the Austrian Science Funds (FWF) and the European Commission.

Quantum simulation of a relativistic particle 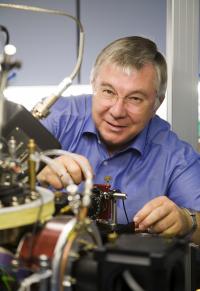