Ants are one of the most successful groups of animals on the planet, occupying anywhere from temperate soil to tropical rainforests, desert dunes and kitchen counters. They're social insects and their team-working abilities have long since been identified as one of the key factors leading to their success. Ants are famously able to lift or drag objects many times their own weight and transport these objects back to their colony. But with previous research having focused on the social aspects of an ant colony, looking at an individual ant has been somewhat neglected.

Now, researchers at the Okinawa Institute of Science and Technology Graduate University (OIST) and Sorbonne University in Paris have investigated why individual worker ants are so strong by taking X-ray images and creating 3D models of their thorax - the central unit of their bodies - to analyze their muscles and internal skeleton. Their study, published in Frontiers in Zoology, examines the hypothesis that loss of flight in worker ants is directly connected to the evolution of greater strength.

"Worker ants evolved from flying insects," said Professor Evan Economo, who leads OIST's Biodiversity and Biocomplexity Unit. "We've always assumed that losing flight helped to optimize their bodies for working on the ground, but we have much to learn about how this is achieved."

Being able to fly might be a common dream amongst people but the reality of flight is that it puts strong constraints on the build of a body. In flying insects, the wing muscles occupy a major part of the thorax - sometimes more than 50%. This means that other muscles, which are used to support and move the head, legs, and abdomen are constrained and squeezed up against the exoskeleton.

But once the constraints of flight are removed, all that space in the thorax is open, which, the researchers surmised, would allow the remaining muscles to expand and reorganize.

Previous research in this area had focused on the external structure of ants but, with the technology available at OIST, the researchers were able to gain a highly detailed picture of what was going on inside the thorax. The aim was to analyze the general features common across all ants, rather than focus on the specialization of certain species. To do this, the researchers did a detailed analysis of two distantly related ant species, including both the wingless workers and the flying queens, and confirmed their findings across a broader sample of species.

They used advanced X-ray technology to scan the internal and external anatomy, like CT scans used in a hospital, but at much higher resolution. From these scans, the researchers mapped all the different muscles and modeled them in 3D. The result was a comprehensive image of the inside of the thorax. They then compared findings from these two species to a range of other ants and wingless insects.

As predicted, the researchers found that loss of flight had allowed for clear-cut reorganization of the thorax. "Within the worker ant's thorax, everything is integrated beautifully in a tiny space," said the late Dr. Christian Peeters, lead author of this paper, who was a research professor at Sorbonne University. "The three muscle groups have all expanded in volume, giving the worker ants more strength and power. There has also been a change in the geometry of the neck muscles, which support and move the head. And the internal attachment of muscles has been modified."

Interestingly, when looking at wingless wasps, the researchers found that these insects had responded to the loss of flight in a completely different way. Wingless wasps are solitary and consume food as they find it. On the other hand, ants are part of a colony. They hunt or scavenge for food that then needs to be carried back to the nest for the queen and younger nestmates, so it makes sense that there was a selection pressure to promote carrying ability.

Ants have been studied for centuries in terms of their behavior, ecology, and genetics but, the researchers emphasized, this story of strength has, so far, been somewhat overlooked. The next step is to develop more detailed biomechanical models of how different muscle groups function, do similar research on the mandible and legs, and explore the diversity seen between ant species.

"We're interested in what makes an ant an ant and understanding the key innovations behind their success" explained Professor Economo. "We know that one factor is the social structure, but this individual strength is another essential factor."

Dr. Christian Peeters passed away in early September 2020, just before this paper was published. In his scientific career, which spanned over thirty-five years and took him around the world, Dr. Peeters researched social insect societies with a focus on the evolution of ant reproductive behaviors, colony strategies, and morphological adaptations. In addition to publishing a long list of scientific papers, Dr. Peeters regularly created videos, gave talks, and contributed to online resources to make his research accessible to a non-scientific audience. OIST recognizes Dr. Peeters significant contributions to science, his passion for entomology, and the work he did in collaboration with the Biodiversity and Biocomplexity Unit. 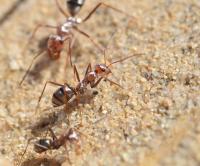