Aging damselflies never lose their libidos and are just as likely as younger competitors to mate.

What's more, sex shows no sign of wearing the old-timers out.

Researchers tagged more than 1,000 azure damselflies mating in a small pond in Hampshire and observed the intricacies of their sex lives through close focussing binoculars for two years.

Dr Christopher Hassall, Marie Curie Fellow in the University of Leeds' School of Biology, who led on the analysis of the data, said: "For the damselflies, it doesn't matter how much sex they have had in the past, they can still keep on going until they die and they don't appear to pay a price for it. It was Aristotle who first proposed that too much sex might shorten your lifespan. That was over 2,000 years ago, but that doesn't seem to bother the damselflies!"

The study, published in the Journal of Animal Ecology, is based on a field study led by Professor David Thompson of the University of Liverpool and also involved researchers from Leeds, Carleton University in Canada and the University of Oulu in Finland.

Although the life of the azure damselfly is actually quite short--most insects in the study died within a week of arriving at the pond--the sex is constant.

Female damselflies generate eggs away from the ponds and streams where they mate. When they arrive, the males scramble to join with them. This might involve fighting and biting, with little regard for the safety of the female. After copulation, the female, guarded by the successful male, will lay her eggs and fly off to generate a new batch of eggs to begin the process again.

The researchers found that females' chances of finding mates at the pond in Hampshire were close to 100% every time they visited and that the cycle of generating eggs and visiting the pond was regular, with no slowdown in visits among older females.

Weaker males found finding a mate more difficult, but the researchers found no significant differences with age--older males were as likely to be successful as their younger competitors.

Dr Hassall said: "It is also clear that it doesn't matter how much sex individuals have had in the past; they can keep on going at the same rate until they die."

That result is surprising because Aristotle's assertion that sex must come at a price (see Notes for Editors) has a sound basis in modern biological theory: males and females take risks, sacrifice feeding opportunities, and use lots of energy when reproducing.

"It is a fair assumption that this will take its toll on the animal, so one possibility is that as time goes on only the individuals in better condition survive and these individuals are then able to keep reproducing," Dr Hassall said.

The study, which focussed on a small pond at the Queen Elizabeth Country Park outside Petersfield, Hampshire, is important because it gives a new insight into the aging and population dynamics of insects in general.

The mating habits of the azure damselfly make it relatively straightforward to study. Pairs form a distinctive heart shape with their conjoined bodies during copulation, which lasts at least 30 minutes. Afterwards, the male remains attached to the female for another 90 minutes as she chooses a site to lay her eggs. Individuals spend their whole lives mating at the same pond or stream.

Dr Hassall added: "It is an excellent model species, but the findings are likely to provide insights not just for damselflies and dragonflies but for other groups of insects of greater public health interest: mosquitoes and tsetse flies, for instance. In order to understand insect populations in the wild, we need to know how reproduction works across a lifecycle and this study has changed how we look at aging and reproduction in these insects."

Professor Thompson commented that this was the fourth significant paper to emerge from this field study, which also included the extraction of DNA from the legs of the damselflies for the purpose of finding out which damselfly parents successfully produce offspring in the next generation.

Damselflies are found on every continent except Antarctica and the azure damselfly is common across the UK (except northern Scotland) and Europe.

They are smaller than dragonflies but are part of the same order of insects, the Odonata. In the first stage of their lives they live as nymphs in fresh water, before metamorphosing into their adult form to breed. Both dragonflies and damselflies are voracious predators, catching small fish, other insects and tadpoles during their aquatic larval stage. While the flying adults eat flies (including mosquitoes), some larger adult dragonflies have been known to tackle hummingbirds.

The research was funded by a grant from the Natural Environment Research Council (NERC) to Professor Thompson.

Striking images of Damselflies mating at the Hampshire study site are available to the media from the link below. The photographs feature markings on the wings of the damselflies made by the researchers to identify individuals. The markings do not hinder the damselflies in flight. The Images are free to distribute but should be credited to the photographers identified in the file names:

1. Aristotle wrote in "On Longevity and Shortness of Life" (c. 350 BCE): "This is why salacious animals and those abounding in seed age quickly; the seed is a residue, and further, by being lost, it produces dryness. Hence the mule lives longer than either the horse or the ass from which it sprang, and females live longer than males if the males are salacious. Accordingly cock-sparrows have a shorter life than the females." 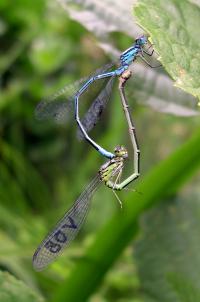