Tardigrades, the microscopic animals also known as water bears and moss piglets, have captured the imagination of scientists for almost 250 years, thanks to their Muppet-like appearance and their ability to survive extreme environments that would destroy most other living things. One of these skills is the ability to endure being dried out for up to a decade or longer. In Molecular Cell on March 16, a team of scientists report that this knack for survival is due to a unique set of proteins they dubbed tardigrade-specific intrinsically disordered proteins (TDPs).

"The big takeaway from our study is that tardigrades have evolved unique genes that allow them to survive drying out," says Thomas Boothby, the Life Sciences Research Foundation Postdoctoral Fellow at the University of North Carolina, Chapel Hill, and the study's first author. "In addition, the proteins that these genes encode can be used to protect other biological material--like bacteria, yeast, and certain enzymes--from desiccation."

For a long time, it was assumed that a sugar called trehelose gave tardigrades the ability to tolerate desiccation. Trehelose is found in a number of other organisms that can survive being dried out, including yeast, brine shrimp, and some nematodes. But biochemical studies of tardigrades have found trehelose at low levels or not at all, and sequencing has not revealed the gene for the enzyme required to make this sugar.

"The question has been, 'If tardigrades aren't relying on trehelose to survive desiccation, what do they use instead?'" Boothby says. He and his team set out to discover how they do it.

The first step of the research was to look at which genes were active under various conditions: unstressed, drying out, and frozen. The researchers identified genes that were upregulated and expressed at high levels when the animals began to dry out. The proteins that these genes encode, the TDPs, are in a class of proteins called intrinsically disordered proteins (IDPs). Unlike most proteins, IDPs have no fixed three-dimensional structure.

After they found the TDP genes expressed at high levels during the drying-out period in one species of tardigrade, the team looked at two other species and found the same genes. One species, which had the genes turned on all the time, is able to survive drying out much more quickly that the others. "We think it can do this because it has so many of these proteins around already and doesn't need time to make them," Boothby says.

To verify that these TDPs were what gave tardigrades their unique abilities, the researchers put the genes encoding them into yeast and bacteria, and confirmed that the TDPs protected these other organisms.

Trehelose helps other organisms to survive drying out by forming glass-like solids when they dry, rather than crystals. Boothby and his colleagues found that TDFs form similar glass-like solids, and showed that when the glassiness of TDPs was disrupted, it correlated with a loss of their protective abilities.

Boothby says TDPs have a number of potential uses, including protecting crops from drought and safeguarding medications that normally require cold storage. "Being able to stabilize sensitive pharmaceuticals in a dry state is very important to me personally," he says. "I grew up in Africa, where lack of refrigeration in remote areas is a huge problem. These real-world applications are one of the things that led me to study tardigrades."

Funding for this research was provided by the National Aeronautics and Space Administration; the National Science Foundation; "Young Researchers International Mobility" of the University of Modena and Reggio Emilia, Italy; the Harold and Leila Y. Mathers Charitable Foundation; and the Simons Foundation of the Life Sciences Research Foundation.

Tardigrades use unique protein to protect themselves from desiccation 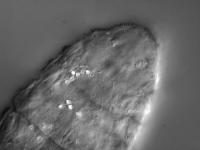