A NASA team is advancing a mission to reveal unprecedented details about solar flares, powerful eruptions that explode with enough energy that each one could power all of Earth for 16,000 years, and which -- when extreme -- can interfere with radio communications and satellites near Earth.

The proposed mission, Focusing Optics X-ray Solar Imager, or FOXSI, was one of five proposals that received Phase-A funding under NASA's Small Explorer Program. NASA also selected another Goddard mission, Mechanisms of Energetic Mass Ejection-Explorer [link to MEME-X]. Of the five, NASA is expected to select one or two for development and implementation.

Although scientists are familiar with the effects of solar flares, they don't completely understand the physical mechanisms that unleash these bursts of energy and light, or that which powers associated clouds of electrons and ions that can be accelerated up to near the speed of light.

Once unleashed, the particles affect all the Sun's atmospheric layers. They pass through the Sun's outermost layer -- the corona where they also are known to originate -- and race across the solar system. When they travel toward Earth, the particles and energy can interfere with space-based communications systems or even trip onboard electronics. The more scientists understand this process, the more situational awareness they have to protect assets in space.

"FOXSI is very new and very different," said Principal Investigator Steven Christe, a scientist at NASA's Goddard Space Flight Center in Greenbelt, Maryland, who leads the multinational FOXSI team developing the satellite mission. "We've not done a mission like this before. For the first time, we're going to actually peer into the region where electrons are accelerated by applying technology that was developed to study the faintest sources in the galaxy but now pointed at the Sun."

Validated in multiple sounding-rocket and scientific balloon missions, FOXSI will make use of a new observing technique for a solar-dedicated satellite mission. It will employ high-angular-resolution grazing-incidence optics traditionally used to study powerful, very distant objects in the universe.

With this technique, X-ray radiation literally grazes off a set of curved mirrors nested inside an optical assembly -- much like how a stone skims the surface of a pond when thrown. The radiation then is focused onto very fast, solid-state pixelated detectors that measure each individual photon, including its arrival, energy, and position on the sky.

The combination of technologies is expected to result in a mission that is 20 times more sensitive, 10 times faster at imaging solar-flare events, and 10 to 100 times better at imaging the relatively faint regions within flares. Current state-of-the-art technology cannot directly sense the particle-acceleration region because it is too faint, Christe added.

"For the first time, we'll have high-quality observations of the largest flares, that have the most significant effect on Earth, to the smallest flares," said Deputy Principal Investigator Albert Shih, referring to the two advanced instruments that would rely on the grazing-incidence optics to gather X-ray radiation. "We're trying to find out how this energy releases at different scales. Do the same mechanisms drive the full range of flares."

Another scientific goal, Christe added, is to determine the role that small flares, also known as nanoflares, play in heating the million-degree corona. According to him, they are an obvious candidate for supplying the needed energy to heat the Sun's outermost layer.

FOXSI would complement NASA's Ramaty High Energy Solar Spectroscopic Imager, or RHESSI, left off. Since its launch in 2002, RHESSI has observed thousands of X-ray flares over a broad field of view, from soft X-rays to higher-energy gamma rays.

"RHESSI gave us glimpses into the physics that leads to violent energy release on the Sun," Christe said. "With FOXSI we should have a clear view into the fundamental science going on in the acceleration sites where all the action takes place, where space weather begins." 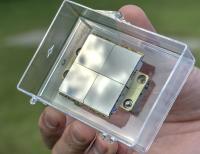