Tropical Storm Gonzalo strengthened into a hurricane on Oct. 14 when it was near Puerto Rico and provided a natural laboratory for the next phase of NASA's HS3 or Hurricane and Severe Storm Sentinel mission.

The WB-57 is a mid-wing, long-range aircraft capable of operation for extended periods of time from sea level to altitudes in excess of 60,000 feet. Two crew members are positioned at separate tandem stations in the forward section of the fuselage. The WB-57 will fly for approximately 6 hours, has a range of approximately 2,500 miles, and can carry up to 8,800 pounds of payload.

The HIWRAP is the High-altitude Imaging Wind and Rain Airborne Profiler, a "conically scanning" Doppler radar, meaning it scans in a cone-shaped manner. Wind measurements are crucial for understanding and forecasting tropical storms since they are closely tied to the overall dynamics of the storm. The HIWRAP instrument is able to measure line-of-sight (along the radar beam) winds and rain and because it scans in a cone beneath the aircraft, it gets two looks at most parts of the storm, allowing calculations of the 3-D wind and rain fields. In the absence of rain, it can also measure ocean surface winds.

The Hurricane Imaging Radiometer (HIRAD) is a passive microwave radiometer that was developed at NASA's Marshall Space Flight Center, Huntsville, Alabama. HIRAD's purpose is to map out where the strongest winds are in a hurricane. HIRAD provides unique observations of sea surface wind speed, temperature and rain. The data HIRAD gathers will advance understanding and predictability of hurricane intensity. HIRAD's data will also help better determine maximum wind speed and structure of the vortex (spinning center). The region of strongest winds are also much better observed with HIRAD than current capabilities.

The WB-57 aircraft is also testing a new dropsonde system developed by Yankee Environmental Systems. The WB-57's focus is on the upper-level outflow from storms and its connection to the inner-core region.

When the WB-57 investigated Gonzalo it was a Category 4 storm on the Saffir-Simpson Hurricane Scale. According to the National Hurricane Center, Gonzalo is the first category 4 hurricane in the Atlantic basin since Ophelia in 2011.

NOAA's GOES-East satellite captured a visible image of Gonzalo on Oct. 15 at 15:15 UTC (11:15 a.m. EDT) that showed the eye of the storm obscured by high clouds.

The National Hurricane Center noted that NOAA aircraft data and microwave images clearly showed concentric eyewalls, with the inner radius of maximum winds only about 4-5 nautical miles from the center.

At 11 a.m. EDT on Oct. 15, Gonzalo's maximum sustained winds increased to near 130 mph (215 kph) and the National Hurricane Center (NHC) noted that fluctuations in intensity were expected over the next couple of days. Gonzalo's cloud-covered eye was located near latitude 23.5 north and longitude 68.0 west, about 640 miles (1,025 km) south-southwest of Bermuda. Gonzalo was moving toward the northwest near 12 mph (19 kph). The minimum central pressure was reported by an Air Force reconnaissance aircraft was 949 millibars.

The WB-57 has been conducting science missions for the Office of Naval Research in September and will continue through October 2014.

The HS3 mission is funded by NASA Headquarters and overseen by NASA's Earth System Science Pathfinder Program at NASA's Langley Research Center in Hampton, Virginia. It is one of five large airborne campaigns operating under the Earth Venture program.

For more information about the HIRAD, visit: https://airbornescience.nasa.gov/instrument/HIRAD

For more information about the WB-57, visit: https://airbornescience.nasa.gov/aircraft/WB-57. 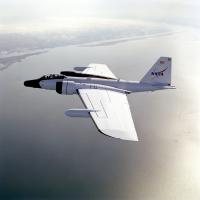