Census of Marine Life scientists have inventoried an astonishing abundance, diversity and distribution of deep sea species that have never known sunlight - creatures that somehow manage a living in a frigid black world down to 5,000 meters (~3 miles) below the ocean waves.

Revealed via deep-towed cameras, sonar and other vanguard technologies, animals known to thrive in an eternal watery darkness now number 17,650, a diverse collection of species ranging from crabs to shrimp to worms. Most have adapted to diets based on meager droppings from the sunlit layer above, others to diets of bacteria that break down oil, sulfur and methane, the sunken bones of dead whales and other implausible foods.

Five of the Census' 14 field projects plumb the ocean beyond light, each dedicated to the study of life in progressively deeper realms - from the continental margins (COMARGE: Continental Margins Ecosystems) to the spine-like ridge running down the mid-Atlantic (MAR-ECO: Mid-Atlantic Ridge Ecosystem Project), the submerged mountains rising from the seafloor (CenSeam: Global Census of Marine Life on Seamounts), the muddy floor of ocean plains (CeDAMar: Census of Diversity of Abyssal Marine Life), and the vents, seeps, whale falls and chemically-driven ecosystems found on the margins of mid-ocean ridges and in the deepest ocean trenches (ChEss: Biogeography of Deep-Water Chemosynthetic Systems).

Edward Vanden Berghe, who manages OBIS (Ocean Biogeographic Information System), the Census' inventory of marine life observations, notes that, unsurprisingly, the number of records in the database falls off dramatically at deeper depths (see animation at http://coml.org/embargo/beyond-sunlight) - a function of the dearth of sampling done in the deep sea.

Scientists working on the deep-sea Census number 344 and span 34 nations.

By the time the 10-year Census concludes in October, 2010, the five deep-sea projects will have collectively fielded more than 210 expeditions, including the first ever MAR-ECO voyage in October-November this year, to explore the Mid-Atlantic Ridge south of the Equator, a scientific collaboration between Russia, Brazil, South Africa and Uruguay.

Each voyage is hugely expensive and challenged by often extreme ocean conditions and requirements that have kept the remotest reaches of Neptune's realm impenetrable until recently.

While the collective findings are still being analyzed for release as part of the final Census report to be released in London on October 4, 2010, scientists say patterns of the abundance, distribution and diversity of deep-sea life around the world are already apparent.

"Abundance is mostly a function of available food and decreases rapidly with depth," says Robert S. Carney of Louisiana State University, co-leader (with Myriam Sibuet of France) of the Census project COMARGE, studying life along the world's continental margins.

"The continental margins are where we find the transition from abundant food made by photosynthesis to darkened poverty. The transitions display the intriguing adaptations and survival strategies of amazing species," says Dr. Carney.

Abundance in the deep sea requires one or more of the following:

"In the bathy- and mesopelagic zones - the largest 3D deep-sea living space - animals either have to cope somehow with food scarcity or migrate long distances up to find food," says MAR-ECO project leader Odd Aksel Bergstad of University of Bergen. "Because it provides an oasis of topographical relief in the center of the ocean, we found a high concentration of animals on the Mid-Atlantic Ridge."

"Distribution is pretty straightforward for animals in the deep sea," says Dr. Carney. "The composition of faunal populations changes with depth, likely a consequence of physiology, ecology and the suitability of seafloor habitat condition for certain animals."

"Diversity is harder to understand. Although the mud on the deep sea floor appears monotonous and poor in food, that monotonous mud has a maximum of species diversity on the lower continental margin. To survive in the deep, animals must find and exploit meager or novel resources, and their great diversity in the deep reflects how many ways there are to adapt."

Meeting an unfamiliar Dumbo, and other tales from the deep

Specific discoveries, some beautiful and all pushing back the frontiers of the unknown, illustrate the results of voyages by the five Census projects exploring the dark deep sea.

On two 2009 voyages to the Mid-Atlantic Ridge by MAR-ECO explorers:

On the October-November 2009 voyage to the Mid-Atlantic Ridge by Russian, Brazilian, South African and Uruguayan MAR-ECO explorers:

On a 2007 voyage in the Gulf of Mexico by COMARGE explorers:

On a just-ended 36-day voyage to the Cayman Trough in the Caribbean, the setting of the 1989, fictional film The Abyss, ChEss explorers were poised to explore the deepest hot-springs on Earth: only to be thwarted by the arrival of tropical storm Ida. Neverthless:

On a 2009 voyage to a range of New Zealand seamounts, a CenSeam team found:

On a 2009 voyage to the Antarctic and Southern Ocean a CeDAMar team trapped deep-sea life:

Diversity and abundance in mud: the living skin of the abyss

On the abyssal floor, the deep mud contains biodiversity that escapes detection by video and photography since most of the animals are only a few millimeters in size and hide among the sediment particles.

"Some scientists have likened deep mud's biodiversity to that of tropical forests. In college I was taught that high biodiversity is a function of habitat diversity - many nooks and crannies. It is, however, hard to imagine anything as monotonous, nook-less and cranny-less as deep-sea mud," says Dr. Carney.

Of some 680 specimens of copepods collected on a recent CeDAMar cruise (DIVA 2) to the southeastern Atlantic, for example, only seven could be identified; 99 percent were new to science. And among hundreds of species of macrofauna (animals about the size of an earthworm) collected in different areas, 50 to 85 percent were unrecognized.

"The abyssal fauna is so rich in species diversity and so poorly described that collecting a known species is an anomaly," says Dr. Billett. "Describing for the first time all the different species in any coffee cup-sized sample of deep-sea sediment is a daunting challenge."

Far rarer than new species in the mud is the capture of a new species of sea cucumber, and rarer still a new genus. However, Dr. Billett and colleagues from the National Oceanography Centre and the Shirshov Institute, Moscow, accomplished this feat this year around the Crozet Islands after steaming for a grueling six days south from South Africa.

One of the new sea cucumbers was yellowish-green, a rare find as virtually all others found in the global seas are whitish grey or purple.

However, what startled researchers most was finding that the most abundant sea cucumber around the Crozet Islands - thousands of specimens at abyssal depths - was a species never seen anywhere else before, now dubbed Peniagone crozeti.

"There is both a great lack of information about the 'abyss' and substantial misinformation," says Dr. Carney.

"Many species live there. However, the abyss has long been viewed as a desert. Worse, it was viewed as a wasteland where few to no environmental impacts could be of any concern. 'Mine it, drill it, dispose into it, or fish it - what could possibly be impacted? And, if there is an impact, the abyss is vast and best yet, hidden from sight.'

"The deep sea is the Earth's largest continuous ecosystem and largest habitat for life. It is also the least studied," says Dr. German.

Sampling at great depths depends on high tech instruments (such as remotely operated vehicles (ROVs), autonomous underwater vehicles (AUVs), and submarines) or "traditional" equipment (trawls, cores, dredges) that need several kilometers of cable to reach the seabed. For example, 12 km (~7.5 miles) of cable was needed to trawl recently down to 4,800 meters (~ 3 miles) depth on the Porcupine Abyssal Plain in the Northeast Atlantic.

Earlier this year, CenSeam scientists aboard New Zealand-based Research Vessel Tangaroa underlined the grueling nature of the challenge of obtaining samples, maps and unprecedented underwater footage of the Graveyard and the Andes seamounts in the South Pacific.

The work was performed with a Deep-Towed Imaging System (DTIS), a technology developed and refined by growing experience over rugged, unfamiliar seamounts and ridges, yielding steadily better results.

Says Mireille Consalvey of the New Zealand National Institute of Water and Atmospheric Research, CenSeam project manager, "Every deployment is a trip into the unknown, with often seasick scientists struggling to work amid high winds and 10 meter swells."

"It can be a tough environment down there. I recall once the abject fear when our video imaging system snagged for 40 minutes on a rock face -- the slow, scary process of recovering it, and the shared worry that our valued recording equipment would arrive at the surface battered and bent. Thankfully, the recorder survived the ordeal better than many of us and yielded brilliant new footage of this remote realm."

One final note about life in the abyss: not all intruders from the lighted world are ROVs or submarines. A southern elephant seal tagged by Census project TOPP recently dove down 2,388 meters (~1.5 miles) from the surface. At that depth, water pressure is roughly equal to 240 times the air pressure at sea level. The human eardrum can rupture at 10 meters.

Started in the year 2000, the Census of Marine Life is an international science research program uniting thousands of researchers worldwide with the goal of assessing and explaining the diversity, distribution and abundance of marine life. It is supported by private sources and government agencies the world over, listed online at www.coml.org/support.

The Census of Marine Life 2010: A Decade of Discovery, to be released in London in October 2010, will address three questions:

Information about a new book about the Census "World Ocean Census: A Global Survey of Marine Life" by authors Darlene Trew Crist, Gail Scowcroft and James M. Harding Jr. is available at www.coml.org/results-publications/worldoceancensus

Started in 2005, project COMARGE (Continental Margin Ecosystems on a Worldwide Scale) established an international network of scientists investigating both ecological and socioeconomic issues related to continental margin ecosystems. It has:

The new book 'Life in the Mid Atlantic' by author Peter Boyle, based to a large extent on MAR-ECO efforts, is available on www.amazon.co.uk. See also the '2009 A Deep Ocean Odyssey' and other resources on www.mar-eco.no.

Started in 2005,CenSeam (Global Census of Marine Life on Seamounts) has assembled more than 300 scientists, policy makers and conservationists from around the world to increase knowledge of seamount ecosystems and the environmental variables that underpin species distributions. CenSeam researchers have:

Begun in 2003, project CeDAMar (Census of the Diversity of Abyssal Marine Life) has sampled abyssal plains and major basins in all the world's oceans, particularly the equatorial Pacific, southern Atlantic and Southern Ocean, and:

Beyond sunlight: Explorers census 17,650 ocean species between edge of darkness and black abyss 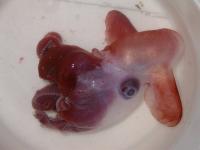