HOUSTON, Nov. 9, 2006 -- The discovery of unexpected magnetic interactions between ultrasmall specks of rust is leading scientists at Rice University's Center for Biological and Environmental Nanotechnology (CBEN) to develop a revolutionary, low-cost technology for cleaning arsenic from drinking water. The technology holds promise for millions of people in India, Bangladesh and other developing countries where thousands of cases of arsenic poisoning each year are linked to poisoned wells.

The new technique is described in the Nov. 10 issue of Science magazine.

"Arsenic contamination in drinking water is a global problem, and while there are ways to remove arsenic, they require extensive hardware and high-pressure pumps that run on electricity," said center director and lead author Vicki Colvin. "Our approach is simple and requires no electricity. While the nanoparticles used in the publication are expensive, we are working on new approaches to their production that use rust and olive oil, and require no more facilities than a kitchen with a gas cooktop."

CBEN's technology is based on a newly discovered magnetic interaction that takes place between particles of rust that are smaller than viruses.

"Magnetic particles this small were thought to only interact with a strong magnetic field," Colvin said. "Because we had just figured out how to make these particles in different sizes, we decided to study just how big of magnetic field we needed to pull the particles out of suspension. We were surprised to find that we didn't need large electromagnets to move our nanoparticles, and that in some cases hand-held magnets could do the trick."

The experiments involved suspending pure samples of uniform-sized iron oxide particles in water. A magnetic field was used to pull the particles to out of solution, leaving only the purified water. Colvin's team measured the tiny particles after they were removed from the water and ruled out the most obvious explanation: the particles were not clumping together after being tractored by the magnetic field.

Colvin, professor of chemistry, said the experimental evidence instead points to a magnetic interaction between the nanoparticles themselves.

Co-author Doug Natelson explains, "As particle size is reduced the force on the particles does drop rapidly, and the old models were correct in predicting that very big magnetic fields would be needed to move these particles.

"In this case, it turns out that the nanoparticles actually exert forces on each other," said Natelson, associate professor of physics and astronomy and in electrical and computer engineering. "So, once the hand-held magnets start gently pulling on a few nanoparticles and get things going, the nanoparticles effectively work together to pull themselves out of the water."

Colvin said, "It's yet another example of the unique sorts of interactions we see at the nanoscale."

Because iron is well known for its ability to bind arsenic, Colvin's group repeated the experiments in arsenic-contaminated water and found that the particles would reduce the amount of arsenic in contaminated water to levels well below the EPA's threshold for U.S. drinking water.

Colvin's group has been collaborating with researchers from Rice Professor Mason Tomson's group in civil and environmental engineering to further develop the technology for arsenic remediation. Colvin said Tomson's preliminary calculations indicate the method could be practical for settings where traditional water treatment technologies are not possible. Because the starting materials for generating the nanorust are inexpensive, she said the cost of the materials could be quite low if manufacturing methods are scaled up. In addition, Colvin's graduate student, Cafer Yavuz, has been working for several months to refine a method that villagers in the developing world could use to prepare the iron oxide nanoparticles. The primary raw materials are rust and fatty acids, which can be obtained from olive oil or coconut oil, Colvin said.

The research is sponsored by the National Science Foundation. 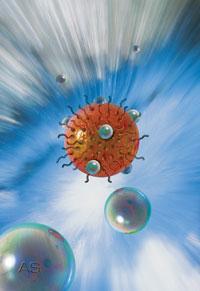