New Discoveries Point to "Cave of John the Baptist" as Important Site in the Time of Isaiah Recently completed digging at Israel's Suba Cave, an archaeological site that is possibly connected with John the Baptist, or Jewish groups of his time has revealed features that deepen the mystery of the site's ancient origins, according to University of North Carolina at Charlotte archaeologist James D. Tabor, associate director of the excavation.

The site was brought to international attention in 2004 with the publication of The Cave of John the Baptist, a controversial book by Israeli archaeologist Shimon Gibson, the site's director. The initial connection with John the Baptist was based on some of the earliest Christian drawings related to John on the cave walls as well as the location of the cave near Ein Kerem, John's birthplace. In particular, the most recent excavations point to the possible existence of a second, still unexcavated cave at the site, suggesting that the location may have been a major complex of uncertain function during the Iron Age

In the 2004 book, Gibson discussed discoveries from the cave and underground reservoir at Suba, 15 miles west of Jerusalem, focusing on the finding that it had seen particularly heavy use during the early Roman period, around the time of John the Baptist and Jesus. In particular, the discovery in 1st. Century AD stratigraphic levels of thousands of small pottery vessels, all apparently ritually broken, led Gibson to theorize that the cave had been a site for baptismal rituals, possibly performed by John the Baptist or Jesus, or other Jewish groups of a similar nature who practices ritual water purification rites. Towards the end of the cave excavation, Gibson also found evidence that the cave's large (24 meters long, 4 meters wide and 5 meters high) plastered reservoir had originally been constructed in the 7th Century BC, near the time of Isaiah. Because the massive cave had been professionally cut from solid rock, Gibson concluded that it must have been a project of the Kingdom of Judah. Because it was not conveniently located in an urban area (the nearest town was Suba, which was more than a kilometer away) and because it contained features that were inconsistent with a storage reservoir or cistern (its unusual shape and broad stairs descending to the water), Gibson theorized that part of its original function might have included ritual rites of water purification.

In the most recent excavations in March, 2006, a University of North Carolina at Charlotte student team, supervised by Gibson and Tabor, uncovered an outside corridor leading to what appears to be another cave. The corridor was filled with deposits that date to the Iron Age (within 100 years of the site's original construction) and leads directly into the steep hillside.

"Just last summer we found new pools outside up above the cave and a corridor, which our most recent dig shows is leading into what we now think is another chamber," said Tabor. "We're almost afraid to continue because it now looks like this is some huge complex, but now that we are into it, we can't stop."

"We're following the corridor on back and taken it up to a wall of fill – it is leading to something – maybe another cave. The corridor narrows as it approaches the cliff face and up above you can see bedrock, maybe a roof, but in front you can just see fill. It could just be a little enclave, but it just keeps going… it's going somewhere."

Tabor notes that if the corridor is leading to a cave, the site was even more extensive during the time of Isaiah than it was during the time of John the Baptist and Jesus. "The entrance, if that's what it is, is blocked with Iron Age fill, so this went out of use quickly after it was built, which is another mystery," Tabor noted. "Why do you build this huge thing and then it goes out of use within a hundred years? You have to wonder."

In the recent excavations, the team also uncovered seven rough stone pillars in the middle of the corridor.

"We have no idea what purpose these pillars served," said Tabor. "They could be quarry stones, but they left them standing in the corridor for some reason."

Tabor sees the new discoveries as further evidence for the past significance and historical importance of the Suba Cave site. If the cave was used for baptismal rituals at the time of John the Baptist, as Gibson has argued, it is a possibility that the site was used because it had ancient significance to John and his followers. Gibson and Tabor have also explored more practical theories, namely that the complex was quarried for some kind of industrial use--perhaps as a clay production facility.

In his 2004 book, Gibson argues that "evidence showed that the cave at Suba was already more than 700 years old at the time of John the Baptist. It was a place, I believe, that must have possessed a hoary Israelite tradition of ritualistic bathing going back into the mists of time." As more evidence has been uncovered Gibson has broadened his theorizing and currently is uncertain of the original function of the facility. There are no precise parallels to this kind of complex from the Iron Age, however, a roughly similar reservoir, but without the external pools and corridor, exists at nearby Bet Shemesh.

UNC Charlotte is the academic sponsor of the Suba Cave project. The dig began in March 2000, and student crews from UNC Charlotte continue to be actively involved in the ongoing excavation. A full scholarly publication on the first six years of excavation is now being prepared and will be published in 2007 by the Israel Exploration Society. Other project sponsors are the Jerusalem Historical Society and the Foundation for Biblical Archaeology, with funding from the John C. Whitehead Foundation. 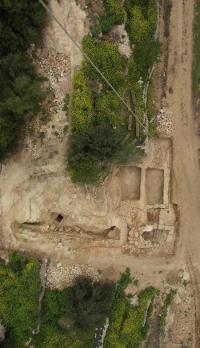