Woody vines, known as lianas, compete intensely with trees and their numbers are on the rise in many tropical forests around the world. A new study at the Smithsonian Tropical Research Institute (STRI) in Panama shows that lianas prevent canopy trees from producing fruit, with potentially far-reaching consequences for other plants and animals.

"Lianas are well known as rivals of trees in tropical forests because lianas compete with trees for sunlight; until this study, however, we didn't know to what extent lianas actually reduce tropical tree reproduction," says Stefan Schnitzer, research associate at STRI and Mellon distinguished professor of biology at Marquette University.

Lianas climb up tree trunks into the sunlit forest canopy, where they spread their leaves and reduce the light available to the very trees that support them. Lianas have a competitive advantage compared to trees because they do not invest as much energy in making large stems to support themselves--instead they use the architecture of their host trees. Rooted in the soil, lianas also compete with their host trees for water, nutrients and other belowground resources.

Schnitzer's team works in Panama at Barro Colorado Nature Monument, one of the best-studied tropical forests in the world. They established 16 experimental plots where all trees and lianas more than one centimeter in diameter were identified to species, tagged, mapped and measured. In 2011, they cut all of the lianas in eight of the plots, leaving the lianas in the other eight plots for comparison.

In 2012, they surveyed the plants growing on the ground under the trees to see how many were producing flowers and fruit. They did the same for the trees in the canopy in 2013. They repeated these counts again in 2016, five years after the initial removal of lianas.

While previous experimental studies have shown that lianas affect reproduction in single species of trees, this is the first experimental study to demonstrate the effects of lianas on the reproduction of an entire tree community. As lianas proliferate in tropical forests, their suppression of tree reproduction could alter the dynamics of forest regeneration and threaten the maintenance of the high diversity of these forests. Since fruit produced by trees is a critical food resource for many tropical forest animals, including monkeys, birds and insects, lowering its availability could jeopardize animal communities as well.

"We suspected that lianas might have a negative effect on tree reproduction, but the strength of the effect, only five years after cutting the lianas, was surprising" said Maria Garcia León, the lead author, who began working with Schnitzer as an undergraduate at the University of Panama and is now operations manager for the Schnitzer lab. "The seeds of most lianas in the tropical forests of the Americas are spread by the wind, whereas most trees seeds and fruit are spread by animals--therefore, lianas reduce tree fruit production but they don't make up for it by producing their own fruit, which, potentially, may deprive animals of food." 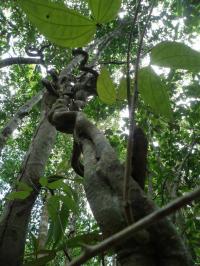