NASA-NOAA's Suomi NPP satellite passed over the eye of Hurricane Florence the morning of landfall. Infrared imagery showed the power and the extent of this massive storm.

Hurricane Florence made landfall near Wrightsville Beach, North Carolina at 7:15 AM EDT (1115 UTC) with estimated maximum winds of 90 mph (150 km/h), and a minimum central pressure estimate of 958 millibars.

Coldest cloud top temperatures of strongest thunderstorms were in the ragged eyewall, the area of thunderstorms surrounding the open eye. Those storms had cloud tops as cold as or colder than minus 80 degrees Fahrenheit (minus 62.2 Celsius). They were surrounded by powerful storms with cloud tops as cold as minus 70 degrees Fahrenheit (minus 56.6 degrees Celsius).

How Large is Florence?

The Forecast Rainfall from NHC

Florence is expected to produce heavy and excessive rainfall in the following areas:

NHC stated at 8 a.m. EDT (1200 UTC), the center of the eye of Hurricane Florence was located by NOAA Doppler weather radars and surface observations to be just inland near latitude 34.1 degrees north and longitude 77.9 degrees west.

NHC said, "The center of Florence will be moving inland very soon, but is expected to slow down even more today and tonight.  As a result, it will remain fairly close to the coast today, with much of the circulation still over water."

Florence is moving toward the west near 6 mph (9 kph). A slow westward to west-southwestward motion is expected today through Saturday, Sept. 15. Maximum sustained winds remain near 90 mph (150 kph) with higher gusts.  Gradual weakening is forecast later today and tonight. Significant weakening is expected over the weekend and into early next week while Florence moves farther inland.

On the forecast track, the center of Florence will move further inland across extreme southeastern North Carolina and extreme eastern South Carolina today and Saturday.  Florence will then move generally northward across the western Carolinas and the central Appalachian Mountains early next week.

Surge-related flooding can vary greatly over short distances.  For information specific to your area, please see products issued by your local National Weather Service forecast office at http://www.weather.gov. Swells generated by Florence are affecting Bermuda, portions of the U.S. East Coast, and the northwestern and central Bahamas. A few tornadoes are possible in eastern North Carolina today.

Once a tropical system moves inland, flooding and flash flooding becomes the biggest threat for days. NHC noted "Life-threatening, catastrophic flash flooding and prolonged significant river flooding are likely over portions of the Carolinas and the southern and central Appalachians through early next week, as Florence is expected to slow down while it moves inland." 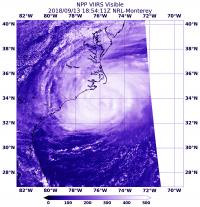