Cats and humans have shared the same households for at least 9,000 years, but we still know very little about how our feline friends became domesticated. An analysis of the cat genome by researchers at Washington University School of Medicine in St. Louis reveals some surprising clues.

The research appears Nov. 10 in the Proceedings of the National Academy of Sciences Early Edition.

Cats have a relatively recent history of domestication compared with dogs; canines arose from wolves over 30,000 years ago.

"Cats, unlike dogs, are really only semidomesticated," said senior author Wes Warren, PhD, associate professor of genetics at The Genome Institute at Washington University​. "They only recently split off from wild cats, and some even still breed with their wild relatives. So we were surprised to find DNA evidence of their domestication."

One way scientists can understand the genetics of domestication is to look at what parts of the genome are altered in response to living together with humans, Warren added.

The researchers compared the genomes of domestic cats and wild cats, finding specific regions of the domestic cat genome that differed significantly.

The scientists found changes in the domestic cat's genes that other studies have shown are involved in behaviors such as memory, fear and reward-seeking. These types of behaviors -- particularly those when an animal seeks a reward -- generally are thought to be important in the domestication process.

"Humans most likely welcomed cats because they controlled rodents that consumed their grain harvests," said Warren. "We hypothesized that humans would offer cats food as a reward to stick around."

This meant that certain cats that would normally prefer to lead solitary lives in the wild had an additional incentive to stay with humans. Over time, humans preferred to keep cats that were more docile.

The cat genome sequencing project, funded by the National Human Genome Research Institute, part of the National Institutes of Health (NIH), began in 2007. The project's initial goal was to study hereditary diseases in domestic cats, which are similar in some cases to those that afflict humans, including neurological disorders, and infectious and metabolic diseases.

To obtain the high-quality reference genome needed for this research, the team sequenced a domestic female Abyssinian cat named Cinnamon. They chose this particular cat because they could trace its lineage back several generations. This cat's family also had a particular degenerative eye disorder the researchers wanted to study.

To better understand characteristics of domestication, the researchers sequenced the genomes of select purebred domestic cats. Hallmarks of their domestication include features such as hair color, texture and patterns, as well as facial structure and how docile a cat is. Cats are bred for many of these types of characteristics. In fact, most modern breeds are the result of humans breeding cats for their favorite hair patterns.

The Birman breed has characteristic white paws. Comparing the Birman to other breeds' genomes reveals that humans likely bred cats for this quality.

The team also looked at a breed called Birman, which has characteristic white paws. The researchers traced the white pattern to just two small changes in a gene associated with hair color. They found that this genetic signature appears in all Birmans, likely showing that humans selectively bred these cats for their white paws and that the change to their genome happened in a remarkably short period of time.

The group also compared the cat genome with those of other mammals -- including a tiger, cow, dog and human -- to understand more about the genetics of cat biology.

"We looked at the underlying genetics to understand why certain abilities to survive in the wild evolved in cats and other carnivores," said Michael Montague, PhD, the study's first author and a postdoctoral research associate at The Genome Institute.

The differences they found in the cat genome help explain characteristics such as why cats are almost exclusively carnivorous and how their vision and sense of smell differ from other animals like dogs.

To digest their fatty, meat-heavy meals, cats need genes to efficiently break down fats. The team found particular fat-metabolizing genes in carnivores such as cats and tigers that changed faster than can be explained by chance. This more rapid change generally means these genes provide some sort of digestive advantage to carnivores that only consume animal proteins. The researchers did not find such changes in the same genes of the cow and human, who eat more varied diets and would not need such enhancements.

Cats also rely less on smell to hunt than dogs. So it is not surprising that the researchers found fewer genes for smell in cats than dogs. But they did find more genes related to an alternate form of smell that detects chemicals called pheromones, which allow cats to monitor their social environment, including seeking out the opposite sex. This ability is not as important to dogs, which tend to travel in packs. But it is crucial in cats, which are more solitary and may have more difficulty finding mates.

Cats also have better hearing than most other carnivores, including an ability to hear in the ultrasonic range to better track prey. Their vision is also exceptional in low light.

"Cats tend to be more active at dawn and dusk," said Montague, "so they need to be able to detect movement in low light." Accordingly, the team identified specific genes that likely evolved to expand cats' hearing range and their vision in low light.

Even though the genomes of domestic cats have changed little since their split from wild cats, the new work shows that it is still possible to see evidence of the species' more recent domestication. "Using advanced genome sequencing technology, we were able to shed light on the genetic signatures of cats' unique biology and survival skills," said Warren. "And we were able to significantly jump start our knowledge about the evolution of cat domestication." 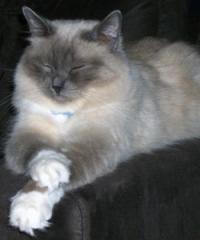