The cave bear started to become extinct in Europe 24,000 years ago, but until now the cause was unknown. An international team of scientists has analysed mitochondrial DNA sequences from 17 new fossil samples, and compared these with the modern brown bear. The results show that the decline of the cave bear started 50,000 years ago, and was caused more by human expansion than by climate change.

"The decline in the genetic diversity of the cave bear (Ursus spelaeus) began around 50,000 years ago, much earlier than previously suggested, at a time when no major climate change was taking place, but which does coincide with the start of human expansion", Aurora Grandal-D'Anglade, co-author of the study and a researcher at the University Institute of Geology of the University of Coruña, tells SINC.

According to the research study, published in the journal Molecular Biology and Evolution, radiocarbon dating of the fossil remains shows that the cave bear ceased to be abundant in Central Europe around 35,000 years ago.

"This can be attributed to increasing human expansion and the resulting competition between humans and bears for land and shelter", explains the scientist, who links this with the scarce fossil representation of the bear's prey in the abundant fossil record of this species.

In order to reach their conclusions, the team of scientists, led by the Max Planck Institute for Evolutionary Anthropology (Germany) studied mitochondrial DNA sequences from bear fossils in European deposits (Siberia, Ukraine, Central Europe and the Iberian Peninsula, specifically Galicia), and carried out a Bayesian analysis (of statistical probability).

The scientists also made comparisons with the modern brown bear (Ursus arctos) and with fossil samples of this species of bear, and managed to show why one became extinct and the other did not. In order to demonstrate this, the study analysed 59 cave bear DNA sequences and 40 from the brown bear, from between 60,000 and 24,000 years ago for the cave bear and from 80,000 years ago up to the present day for the brown bear.

Decline of the caves, extinction of the bears

The impoverishment of ecosystems during the last glacial maximum was "the 'coup de grace' for this species, which was already in rapid decline", the author explains.

The present day brown bear did not suffer the same fate and has survived until today for one simple reason – brown bears did not depend so heavily on the cave habitat, which was becoming degraded, and this is why they did not follow the same pattern as the cave bears.

"Brown bears rely on less specific shelters for hibernation. In fact, their fossil remains are not very numerous in cave deposits", the Galician researcher says.

The definitive extinction of the cave bear "broadly" coincides with the last cooling of the climate during the Pleistocene (between 25,000 and 18,000 years ago), which may have led to a reduction in shelter and the vegetation that the animals fed on.

The cave bear inhabited Europe during the Late Pleistocene and became definitively extinct around 24,000 years ago, although it held out for a few thousand years longer in some areas, such as the north west of the Iberian Peninsula, than in other places. This ursid was a large animal, weighing 500 kg on average, and was largely a herbivore. The bear hibernated in the depths of limestone caves, where the remains of individuals that died during hibernation slowly accumulated over time. 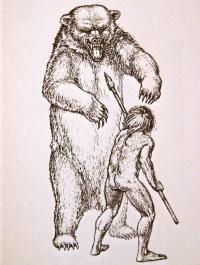 Decline of the Cave Bear