It is safe to say that 3D displays do not necessarily occur in nature - unless one considers the cephalopod, which includes the squid and octopus, as a living 3D display which can morph its structure and create complex shapes and textures for camouflage purposes or drag control (see video). Now, a research team from the University of Iowa and the University of Illinois at Urbana-Champaign is developing a smart skin inspired by the cephalopod which can be used in 3D displays, as interfaces for the visually impaired, and to help reduce drag on marine vehicles.

In a study published in Advanced Materials Technologies, the team, led by Caterina Lamuta, assistant professor of mechanical engineering at the University of Iowa, as well as Sameh Tawfick and Nancy Sottos, professors at the University of Illinois at Urbana-Champaign, found that using twisted and coiled polymer fibers to create artificial muscles could produce lightweight smart skins that are capable of fine motion and shape modulation.

In cephalopods, voxels are controlled by the animal's papillae muscles which allow their skin to take numerous forms, protrude outward, and take new shapes in fractions of seconds (see video, see video). The team took inspiration from the cephalopods' papillae to reproduce digital texture voxels (DTVs) from twisted spiral artificial muscles (TSAMs). With an input voltage of only 0.2 V/cm, TSAMs provide a stroke of 2000% and a roughness profile ranging from a few microns to one centimeter. "These lightweight twisted spiral artificial muscles hold the potential to replace heavy and bulky devices based on conventional electric and pneumatic actuators," said Lamuta. "We actuate this skin using small electrical impulses instead of heavy power sources and noisy air compressors, which allows for more precise movement and general ease of use."

An array of individually controlled TSAMs is embedded into a soft material to reproduce a soft, stretchable, and smart skin, able to perform a potentially unlimited number of output textures and shapes (see video). "The DTVs provide what we call on-demand textures and patterns," said Lamuta. "Because our DTVs are so lightweight and flexible, we believe that their use can pave the way for several applications, ranging from the hydrodynamic drag control of underwater vehicles and robots, to the development of 3D displays and haptic feedback devices for virtual reality and robotic surgery".

Lamuta and her team's work was supported by the Beckman Institute for Advanced Science and Technologies at the University of Illinois Urbana?Champaign, the United States Office of Naval Research, the National Science Foundation, and United States Air Force. 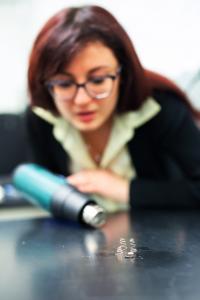