Researchers of Aalto University have developed surfaces where oil transports itself to desired directions. Researchers' oleophobic surfaces are microtextured with radial arrays of undercut stripes. When oil drops fall on surfaces, drops move away from the landing point to the direction set by asymmetric geometrical patterning of the surface. The surfaces open up new avenues for power-free liquid transportation and oil contamination self-removal applications in analytical and fluidic devices.

- We developed surfaces that are able to move liquid oil droplets by surface tension forces. Droplets from anywhere within the pattern will spontaneously move to the center of the pattern, tells Postdoctoral Researcher Ville Jokinen.

New surfaces are also able to move low surface tension liquids other than oil. They work for water, wine and even pure ethanol.

Directional liquid transportation of water is also found in nature, for instance, in cactus needles and the shells of desert beetles. Researchers see a range of industrial applications.

- The droplets position themselves very accurately at the center of the pattern. This could be used to deposit arrays of functional materials. We envision the patterns being used the other way around as well, for instance, to transport unwanted stray droplets away from critical areas of devices, such as to prevent clogging of nozzles in inkjet printing, says Professor Robin Ras. 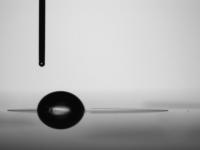 Oil Drop Moves Away from the Landing Point (1 of 2) 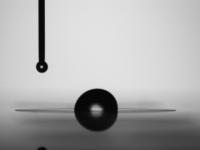 Oil Drop Moves Away from the Landing Point (2 of 2)