Birds are the last remaining dinosaurs. They're also some of the most vibrantly colored animals on Earth. A new study in Nature Communications reveals that iridescent feathers go way back--a newly discovered species of dinosaur from 161 million years ago had rainbow coloring.

Caihong juji was tiny, about the size of a duck, with a bony crest on its head and long, ribbon-like feathers. And, based on analysis of its fossilized feathers, the feathers on its head, wings, and tail were probably iridescent, with colors that shimmered and shifted in the light. Its name reflects its appearance--in Mandarin, it means, "rainbow with the big crest." The new species, which was first discovered by a farmer in northeastern China, was described by an international team of scientists led by Dongyu Hu, a professor in the College of Paleontology at the Shenyang Normal University in China.

"When you look at the fossil record, you normally only see hard parts like bone, but every once in a while, soft parts like feathers are preserved, and you get a glimpse into the past," says Chad Eliason, a postdoctoral researcher at The Field Museum and one of the study's authors. Eliason, who began work on the project as a postdoctoral fellow at the University of Texas at Austin, added, "The preservation of this dinosaur is incredible, we were really excited when we realized the level of detail we were able to see on the feathers."

When the scientists examined the feathers under powerful microscopes, they could see the imprints of melanosomes, the parts of cells that contain pigment. For the most part, the pigment that was once present was long gone, but the physical structure of the melanosomes remained. As it turns out, that was enough for scientists to be able to tell what color the feathers were.

That's because color isn't only determined by pigment, but by the structure of the melanosomes containing that pigment. Differently shaped melanosomes reflect light in different colors. "Hummingbirds have bright, iridescent feathers, but if you took a hummingbird feather and smashed it into tiny pieces, you'd only see black dust. The pigment in the feathers is black, but the shapes of the melanosomes that produce that pigment are what make the colors in hummingbird feathers that we see," explains Eliason.

Colorful plumage is used in modern birds to attract mates--the rainbow feathers of Caihong might be a prehistoric version of a peacock's iridescent tail. Caihong is the oldest known example of platelet-shaped melanosomes typically found in bright iridescent feathers.

It's also the earliest known animal with asymmetrical feathers--a feature used by modern birds to steer when flying. Caihong couldn't fly, though--its feathers were probably primarily used to attract mates and keep warm. While modern birds' asymmetrical feathers are on their wingtips, Caihong's were on its tail. "The tail feathers are asymmetrical but wing feathers not, a bizarre feature previously unknown among dinosaurs including birds," said co-author Xing Xu of the Chinese Academy of Science. "This suggests that controlling [flight] might have been first evolved with tail feathers during some kind of aerial locomotion."

But while Caihong's feathers were a first, it had other traits associated with much earlier species of dinosaurs, including the bony crest on its head. "This combination of traits is rather unusual," says co-author Julia Clarke of the University of Texas at Austin. "It has a velociraptor-type skull on the body of this very avian, fully feathered, fluffy kind of form."

This combination of old and new traits, says Eliason, is evidence of mosaic evolution, the concept of different traits evolving independently from each other. "This discovery gives us insight into the tempo of how fast these features were evolving," he adds.

For Eliason, the study also illuminates the value of big data. "To find the color of Caihong's feathers, we compared its melanosomes with a growing database of thousands of measurements of melanosomes found in modern birds," he says. It's also broadened his own research interests.

"I came out of the project with a whole different set of questions that I wanted answers to--when I open up a drawer full of birds in the Field Museum's collections, now I want to know when those iridescent feathers first developed, and how." 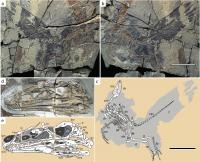