Dog owners tell their vets that Labrador retrievers are always interested in food, and new work shows there might be a biological truth to the claim. A May 3 study in Cell Metabolism links a gene alteration specifically found in Labs and related flat coat retrievers to greater food-motivated behavior, describing the first gene associated with canine obesity. The variation also occurs more frequently in Labradors chosen as assistance dogs, and might explain why these canines seem more trainable with food rewards.

Labrador retrievers are more interested in food and tend to be more obese than other breeds, regardless of owner. "Whenever there's something more common in one breed than another, we think genetics are involved," says Eleanor Raffan, a veterinary surgeon and geneticist at the University of Cambridge who previously studied human obesity before investigating the canine angle.

Starting with an initial cohort of 15 obese and 18 lean Labrador retrievers, Raffan and her colleagues selected three obesity-related genes to examine, all of which were known to affect weight in humans. This first analysis turned up a variation in a gene called POMC. In more of the obese dogs, a section of DNA was scrambled at the end of the gene. The deletion is predicted to hinder a dog's ability to produce the neuropeptides β-MSH and β-Endorphin, which are usually involved in switching off hunger after a meal.

In humans, common variants in POMC have been associated with differences in body weight. "There are even some rare obese people who lack a very similar part of the POMC gene to that which is missing in the dogs," says Stephen O'Rahilly, co-director of the Wellcome Trust-Medical Research Council Institute of Metabolic Science and a senior author on the study.

In a larger sample of 310 Labrador retrievers, Raffan and her colleagues discovered a host of canine behaviors associated with the POMC deletion. Not all Labs with the DNA variation were obese (and some were obese without having the mutation), but in general the deletion was associated with greater weight and, according to an owner survey, affected dogs were more food-motivated--they begged their owners for food more frequently, paid more attention at mealtimes, and scavenged for scraps more often. On average, the POMC deletion was associated with a 2 kg weight increase.

"We've found something in about a quarter of pet Labradors that fits with a hardwired biological reason for the food-obsessed behavior reported by owners," says Raffan. "There are plenty of food-motivated dogs in the cohort who don't have the mutation, but there's still quite a striking effect."

Notably, the POMC deletion was markedly more common in the 81 assistance Labrador retrievers included in the study, occurring in 76 percent of these dogs. "We had no initial reason to believe that the assistance dogs would be a different cohort," says Raffan. "It was surprising. It's possible that these dogs are more food-motivated and therefore more likely to be selected for assistance-dog breeding programs, which historically train using food rewards."

But, Raffan cautions, the results could also be just a quirk of the data. "We haven't yet looked at puppies and asked if they're more likely to qualify as an assistance dog if they have the mutation," she says.

The study adds to a growing body of knowledge about the biological reasons driving weight. "The behavior of dogs carrying this mutation is different," says Raffan. "You can keep a dog with this mutation slim, but you have to be a lot more on-the-ball--you have to be more rigorous about portion control, and you have to be more resistant to your dog giving you the big brown eyes. If you keep a really food-motivated Labrador slim, you should give yourself a pat on the back, because it's much harder for you than it is for someone with a less food-motivated dog."

Moving forward, Raffan and her colleagues are also investigating the potential therapeutic implications for humans with obesity. The impacts of mutation in POMC have previously been difficult to research because in mice and rats, animals typically used to study obesity, the gene is quite different from the human version. "Further research in these obese Labradors may not only help the well-being of companion animals, but also carry important lessons for human health," says O'Rahilly.

Why Labrador retrievers are more interested in food than other breeds 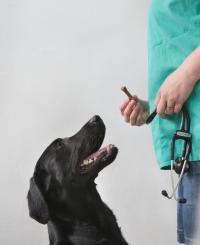 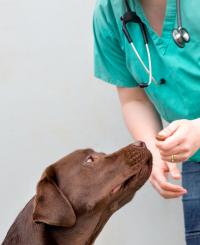