Prey can evade predators and also avoid attacks. However, some can escape after a successful attack, that is, from inside a predator after being swallowed. For example, some animals that can survive predators' digestive systems are excreted in feces and thereby escape, albeit in a passive manner. Now, for the first time, research has documented the quick, active escape of prey from the body of a predator after being eaten.

Kobe University ecologist SUGIURA Shinji found that the aquatic beetle Regimbartia attenuata can actively escape from the vent of the frog Pelophylax nigromaculatus via the digestive system (Fig. 1; Movie: https://youtu.be/qbefo_vUzog). Furthermore, his laboratory experiments suggest that the beetle can promote frog excretion to facilitate its escape. His research appears in the 3 August 2020 issue of Current Biology.

Many frog species lack teeth and are unable to kill prey before swallowing it. Therefore, frogs' digestive systems play an important role in killing prey. To investigate the defenses of insects against frogs, Sugiura provided frogs with various insect species.

These observations indicate that swallowed R. attenuata move toward the frog vent through the digestive system. P. nigromaculatus always excreted the undigested parts of prey (except live R. attenuata ) > 24 h after swallowing them (Fig. 3). Because the frog's sphincter muscle pressure keeps the vent closed, the tiny beetles are unable to exit through the vent without inducing the frog to open it. Therefore, R. attenuata may stimulate the frog's gut to promote excretion. The same behavior was observed when R. attenuata was swallowed by four other frog species: Pelophylax porosus, Glandirana rugosa, Fejervarya kawamurai, and Hyla japonica (Fig. 2).

This study is the first to report the successful escape of prey insects from the vent of a predator and to suggest that the prey promotes predator excretion to escape from inside the predator's body. 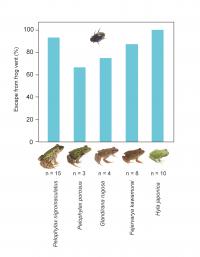