An insect with a tiny brain and minimal computing power has become the first animal proven to use the Milky Way for orientation. Scientists from South Africa and Sweden have published findings showing the link between dung beetles and the spray of stars which comprises our galaxy.

Although their eyes are too weak to distinguish individual constellations, dung beetles use the gradient of light to dark provided by the Milky Way to ensure they keep rolling their balls in a straight line and don't circle back to competitors at the dung pile.

"The dung beetles don't care which direction they're going in; they just need to get away from the bun fight at the poo pile," said Professor Marcus Byrne from Wits University.

Byrne and his team previously proved that dung beetles use the sun, the moon and polarised light for orientation. In their experiments, they gave the beetles "caps" which blocked light from reaching their eyes. The team also discovered that the beetles climb on top of their dung balls to perform an orientation "dance" during which they locate light sources to use for orientation.

Now, further experiments, conducted under the simulated night sky of the Wits Planetarium, have shown that the beetles also use the Mohawk of the Milky Way – giving new meaning to dancing with the stars!

"We were sitting out in Vryburg (conducting experiments) and the Milky Way was this massive light source. We thought they have to be able to use this – they just have to!" said Byrne.

Not all light sources are equally useful landmarks for a dung beetle. A moth keeping a constant angle between itself and a candle flame will move in a circle around the flame. However, a celestial body is too far away to change position relative to a dung beetle as it rolls its ball, with the result that the beetle keeps travelling in a straight line.

The scientists suspect the beetles have a hierarchy of preference when it comes to available light sources. So if the moon and the Milky Way are visible at the same time, the beetles probably use one rather than the other.

A few other animals have been proven to use stars for orientation, but the dung beetle is the first animal proven to use the galaxy.

Dung beetles use stars for orientation 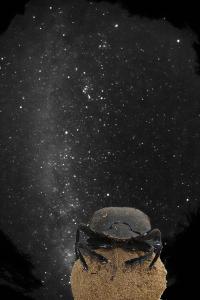